Arlene Boras is an X-ray technician who became recently interested in the Magneri company, run by computer magnate Peter Magneri. Her sudden interest came during her time in her position, when Magneri had a check-up which revealed a bad heart. Instead of revealing the truth, Arlene covered it up by switching that X-ray with one of a healthier heart and giving Magneri a clean bill of health. She later quit her job and began short selling the Magneri stock and betting against the company, standing to make a lot of money once Magneri dies. Arlene told her friend and roommate, Vickie Deline, of her duplicitous deal; thinking that Vickie would become her partner, and even showed Vickie the X-ray. Instead, Vickie decided to take the X-ray and warn Magneri, which would ruin Arlene's plan.

After seeing that the X-ray was gone and knowing that Vickie took it, Arlene turned heel and planned to kill Vickie; grabbing a knife as she followed Vickie to the front gate of the Magneri household, where Vickie was attempting to speak to Magneri. Vickie expressed shock over Arlene's heel persona, as Arlene appeared as a hooded villainess clutching a knife in her hand. Arlene chased Vickie to a nude beach, where Vickie knocked on the door of Chance Singer's trailer for help, but getting no answer. Shortly afterwards, the evil Arlene later caught Vickie and stabbed her to death, and took the X-ray from her deceased former friend.

During the summation, Arlene stated that she was going to split the money with Vickie, and to avoid a second murder charge, she revealed that Magneri has an aortic aneurysm, and any stress could kill him. Arlene is arrested for Vickie's murder, while Magneri was saved and hospitalized later in the episode. Arlene resurfaced in Season Seven's "Mr. Monk's 100th Case," appearing in a jailhouse interview. Her sentence was revealed as 25 years to life, but she also stated that she got her deposit back after Monk cleaned her apartment. 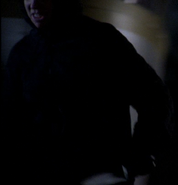 Arlene in her hooded disguise 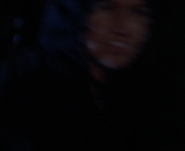 A close-up of Arlene's heel persona and her sinister sneer 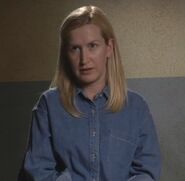 Arlene's prison interview from "Mr. Monk's 100th Case."
Add a photo to this gallery
Retrieved from "https://femalevillains.fandom.com/wiki/Arlene_Boras_(Monk)?oldid=189166"
Community content is available under CC-BY-SA unless otherwise noted.