Ariel Eberhart (Danielle Panabaker) was the antagonist in the 2012 episode "Plumed Serpent" for the TV series "Grimm".

Ariel Eberhart is a Daemonfluer, which was a dragon like creature.  She had a job as a fire dancer at a club.

Following the death of her mother, her father Fred Eberhart (Don Alder) had fallen into depression and succombed to his illness.  Her father stole copper, and later murdered two other copper theives who threatened him.

Ariel met Nick Burkhardt (David Giuntoll) and recognised him as a Grimm.  She was openly flirtatous with him, changing in front of him in her dressing room after her performance.  She also lied and claimed to no longer have contact with her father.

Nick followed her home, suspicious of her story.  Theres she attacked him, catching him by surprise, and ripping his shirt open and dislodging his phone.  Nick easily pushed her off.  However, when his phone rang, Ariel answered.  It was Nick's girlfriend Juliette Silverton (Elizabeth Tulloch), creating several problems for Nick.

Later Ariel went to visit her father in the cave he had made his new home in, and told him she could save him.

Ariel then broke into Nick's home and kidnapped Juliet.  She then returned, and laid face down in Nick's bed.  Nick mistook her for Juliet, until he spotted her Dragon tattoo.  Angered Nick threw her across the room, demanding to know what she had done with Juliet.  Ariel let out a burst of flames, and Nick dodged them.  After running away, Ariel called Nick to tell him to go ther her father's lair, telling him the directions.  Nick took Monroe (Silas Weir Mitchell) with him, and they arrived at the cave.  Fred attacked Nick, and the two began fighting.  Monroe snuck around the back, and untied Juliet.  Juliet then hit Ariel in the head, knocking her down.

Nick ended up killing Fred, which is what Ariel wanted in the beginning.  It seems that his death by combat was the only death that Daermonfuer's considered honourable (being a martial species).  When told she hadn't helped him, she replied that Nick had.  Ariel expelled more flammable gasses, and Nick ran just in time before the place blew up.  However, as a Daemonfluer, Ariel survived and later left. 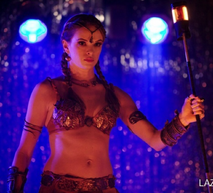 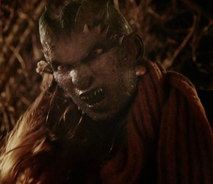 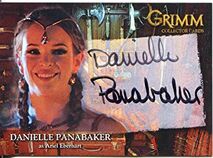 Add a photo to this gallery
Retrieved from "https://femalevillains.fandom.com/wiki/Ariel_Eberhart_(Grimm)?oldid=195594"
Community content is available under CC-BY-SA unless otherwise noted.