Start a Wiki
watch 01:50
The Loop (TV)
Do you like this video?
Ariel is a professional wrestler and valet best known for competing in WWE, where she portrayed a villainess.

Ariel debuted in WWE's ECW brand on June 20, 2006 as a mysterious tarot card reader, but it was after doing a session with Kevin Thorn that Ariel established herself as a villainess, becoming a vampiress and serving as Thorn's valet. Ariel also competed in the ring, making her WWE in-ring debut in an "Extreme Catfight" against ECW original Francine, which ended in a no contest. She also feuded with Divas such as Trinity and Kelly Kelly, which included defeating the latter in a mixed tag team match at December to Dismember. However, a week later on ECW, Ariel was defeated by Kelly in singles action.

In 2007, the evil Ariel became the lone female member of the New Breed faction, which consisted of Thorn, Marcus CorVon, Matt Striker, and Elijah Burke. She spent the remainder of her WWE tenure as the faction's valet, as they feuded with ECW Originals Tommy Dreamer, Rob Van Dam, Sabu, and The Sandman. This included WrestleMania 23, where the villainous faction was defeated by the Originals, only to win the rematch on ECW. Ariel was released from WWE in May 2007. 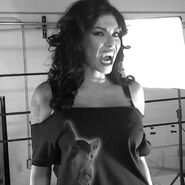 Add a photo to this gallery
Retrieved from "https://femalevillains.fandom.com/wiki/Ariel_(WWE)?oldid=98638"
Community content is available under CC-BY-SA unless otherwise noted.