Ariana Braxton (Jordan Ladd) is the main villainess from the 2012 Lifetime film, Murder on the 13th Floor (airdate May 19, 2012). She is the insecure wife of Jordan Braxton, though their marriage hasn't been a happy one in some time. It gets worse when Ariana discovers that Jordan has been having an affair with their live-in nanny, Nia, resulting in her becoming pregnant.

After learning that she won't get much if she goes through with divorcing Jordan, Ariana decides to take matters into her own hands and attempts to eliminate Nia in a murder-for-hire plot. Her hired gunmen, Viktor and Marco, break into the apartment, where Nia and Cody (Ariana and Jordan's son) are in, while the couple is at a gathering. To Ariana's dismay, she discovers in a phone conversation with her henchmen that they didn't kill Nia, but her best friend Becca.

When Cody's life is also endangered, Ariana and Jordan rush back home, where Ariana finds Cody with Nia. Nia gives Ariana a silencer that she recently used to kill Viktor, leading to a confrontation at the rooftop, which also included Marco. Ariana turned heel by suddenly pointing the gun at Nia, doing so after calling out to Nia and claiming to have captured Marco. After revealing herself as the true mastermind to Nia, the evil Ariana screamed that Nia has ruined her life and then ordered Marco to kill her. She decided to point the gun at the hitman, but it wasn't loaded. At that point, Nia grabs Marco's gun and shoots him to save Ariana, much to Ariana's shock. However, the villainess ends up punched by Nia, who claimed that it was the only reason why she saved her. In the film's final scene, Ariana ends up arrested for her crimes against Nia. 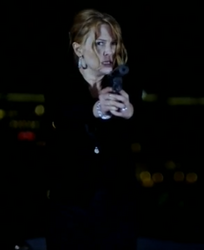 Retrieved from "https://femalevillains.fandom.com/wiki/Ariana_Braxton_(Murder_on_the_13th_Floor)?oldid=137663"
Community content is available under CC-BY-SA unless otherwise noted.