Start a Wiki
watch 01:48
The Loop (TV)
Do you like this video?
Ariadne (Sybil Danning) was the evil princess in the 1983 Italian adventure movie "Hercules".

In the beginning it appears as if Ariadne is helping Hercules (Lou Ferrigno) on his quest to find Zeus' lightning bolts.  However, her evilness comes out and reveals her true intentions.  Adriana is King Minos' sorceress and the two plan to conquer the world with her magic and his giant robots.

Ariadne has stolen a sacred sword of the goddess Hera from her statue in the temple.  The sword gives Minos (William Berger) and her power over the Phoenix, which is held captive in Crete's volcano.

Ariadne kidnaps Hercules and Cassiopeia (Ingrid Anderson), the daughter of King Minos.  The plan is to sacrifice Cassiopeia.  Hercules is dumped into the ocean and left for dead.

Later, Hercules and Cassiopeia attempt to escape as Atlantis sinks around them. Ariadne appears, cutting off their escape route and still attempts to sacrifice Cassiopeia by throwing a spear. However, Hercules "beats her on the draw", throwing his own sword first which penetrates the evil woman's belly, the point exiting her back, skewering her straight through. Hercules then runs up and retrieves his sword from the dead Ariadne's body. While Hercules and Cassiopeia escape, Ariadne slowly turns to dust.  The last thing we see is Ariadne's gold head piece tip over into the pile of ash left by her disintegrated head.

Ariadne provides quite a bit of eye-candy in the film, with her lowcut corset and blue dress.  The outfit barely contained her bosoms, and anything she did in it, had the audience wondering if ther was going to be some spillage occuring. 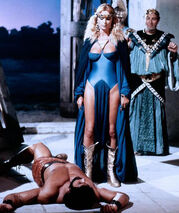 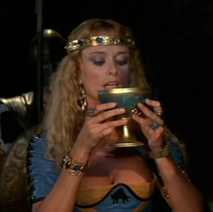 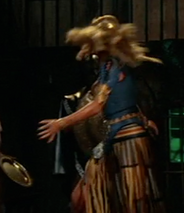 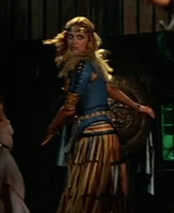 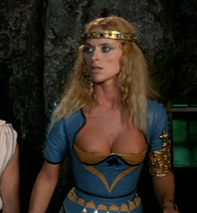 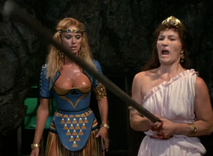 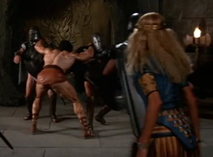 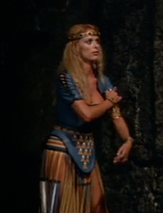 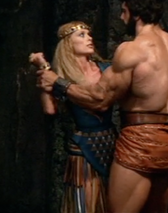 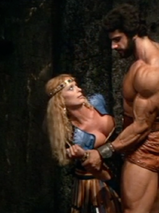 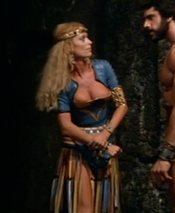 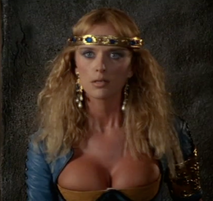 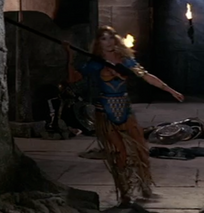 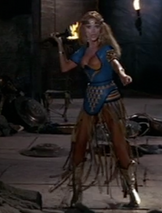 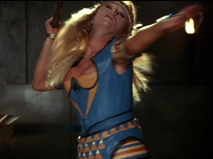 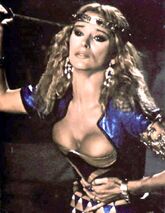 Add a photo to this gallery
Retrieved from "https://femalevillains.fandom.com/wiki/Ariadne_(Hercules)?oldid=121188"
Community content is available under CC-BY-SA unless otherwise noted.