Areola is the personal assistant to Judd Winner, the episode's primary antagonist, who runs an illegal "Girls Gone Wild"-style operation named "Gals Gone Wild". To recruit random college girls to be used in the videos, Arelola hypnotizes them using her nipples. When protagonists Stroker and Hoop botch an assignment from Judd to investigate his wife, the assistant uses her talent on them as well; forcing them to degrade themselves in the videos as payback.

Under pressure from the Japanese market to boost sales, Judd splices the DNA of the two most recent co-ed girls with that of wild tigers, to create actual living "catgirls". Stroker and Hoop eventually bust in on this operation as well, and are able to free the girls before Areola can drop her top. Stroker attempts to unveil evidence of Judd's deeds at the annual Porny Awards, but the tape is accidentally destroyed when it is run over by CARR. It is presumed that Judd and Areola get away scot-free an continue their business

Areola is a curvaceous, very well endowed woman of average height with black eyes and long black hair that stops at her upper back. Her primary attire consists of wearing a white business jacket that exposes her cleavage with a black tube top dress underneath and black high heel shoes. She also wears glasses with a black frame.

Her secondary attire consists of a small sized white t-shirt that shows "GGW" in red on the front of the shirt which exposes her midriff and a small bit of her cleavage, a grey colored skirt, while still retaining her black glasses and high heeled shoes.

It also appears that she never wears a bra underneath any of her clothes, possibly due to the positions at her job while working with Judd Winner.

Complete Hypnosis: Anyone who looks directly into Areola's nipples will be completely hypnotized while she constantly rants "look into my nipples, not around the nipples, but in the nipples. Goooood." The victims will do anything Areola orders them to against their will and having absolutely no memory of being hypnotized after. However, if anyone resist looking, Areola will increase the temptation by sexually playing with her breasts and nipples while exposed to make her targets give in to it. 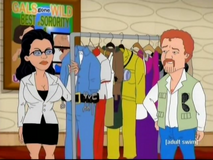 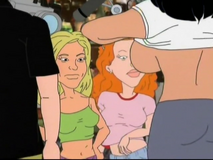 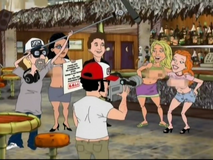 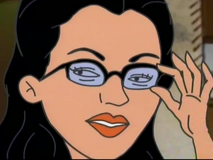 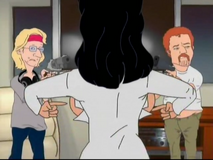 Male or female, it matters not... 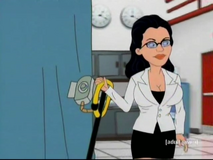 Wheeling out the cage with the tiger-girls... 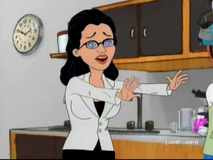 ...and then fleeing from said girls, once they've escaped.
Add a photo to this gallery
Retrieved from "https://femalevillains.fandom.com/wiki/Areola_(Stroker_and_Hoop)?oldid=175548"
Community content is available under CC-BY-SA unless otherwise noted.