Start a Wiki
watch 01:51
The Loop (TV)
Do you like this video?
Ardora is the main antagonist in the series ‘Queen Delecta Of The Seven Planets’. She is the beautiful raven-haired half-sister of Delecta‘s Deceased Father, and the ruler of the rebel planet Myro. Along with her ward, Prince Umbrio, she makes several schemes to rule all Seven planets of the Kalpan District.

In Issue One of Don Fortune magazine, at Delecta’s coronation Ardora, along with Umbrio and a human named Lawrence, who defects to the side of the heroine, goes to Delecta’s coronation in the hopes of usurping her throne. Ardora, Umbrio and Lawrence, who currently cannot speak this language and is being played for a fool, make their way to the pressure chamber where Ardora stabs one of the guards, and does something dangerous to the pressure, in the intent of murdering the entire counsel along with Delecta. However, Delecta gets everyone out safely. Ardora also sends the counsel a letter saying that she will kill them if they don’t Force Delecta to abdicate the throne to her.

Ardora and Umbrio attempt to kill Delecta, but their plan fails. Later, Lawrence takes Delecta to their hideout, where he has realised that the beautiful villainess has played him for a fool. Lawrence punches out Umbrio, while Delecta has her breathable gas helmet damaged by Ardora. She escapes with Umbrio, but Lawrence rescues Delecta.

In Issue Two, Lawrence, along with a member of the council, travels to Myro to recover his ship. Lawrence has now learned the language that these people speak. However, they are met by Ardora and her guards, who take them captive under the guise of them being her guests. Ardora makes an obvious attempt to seduce Lawrence while she is waiting on him hand and foot, but the maniac Umbrio mistakes her seduction attempts for real affection and while his beautiful ruler is away, he kidnaps Lawrence and takes him to his evil labarotory. Ardora comes back and quickly realises what Umbrio has done.

Ardora confronts him in the laboratory, where Umbrio is getting ready to use his duplication ray on Lawrence, which he does. However, Delecta appears and rescues the council member and Lawrence. She sends Ardora and Umbrio back to their palace, turns Lawrence back into one and destroys the lab.

Ardora is absent in issue 3 but it is likely that she orchestrated the scheme.

In issue 4, Ardora bursts into Delecta’s council demanding that Delecta duel her in a battle to the death for the throne. Initially Delecta refuses, but once Ardora has gone the council reveals that her citizens want her to fight for the throne.

Ardora is next seen wearing a seductive outfit gloating to Umbrio about how she will become queen. Umbrio would like to join her in her ship during the duel but Ardora unwisely refusing, considering his frail mental state. Because of this Umbrio plots to board, kill both Ardora and Delecta and seize control of the Kalpan district.

When the duel begins, both are on equal ground in their ships but Ardora’s is quickly damaged. However, Umbrio is behind her... Ardora screams out before she is knocked unconscious with a wrench by her deranged ward. Umbrio also tries to murder Delecta in the duel, but the plot fails and he crashes, killing him and Ardora in the explosion. Oddly, the explosion itself is not even seen, the last you see of the rogues is Umbrio screaming out and Ardora unconscious on the ground. 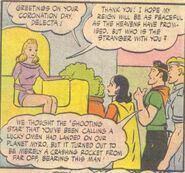 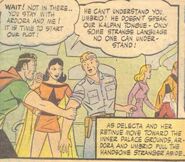 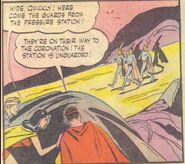 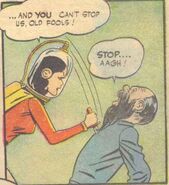 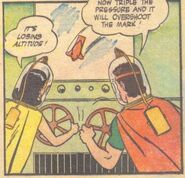 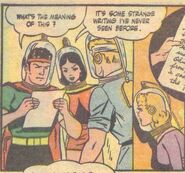 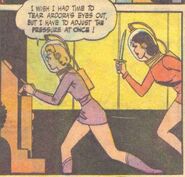 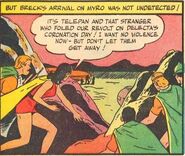 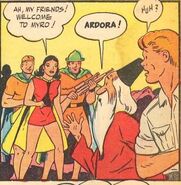 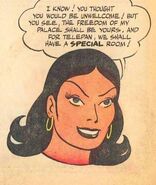 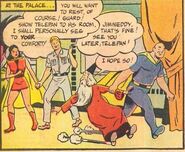 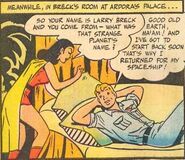 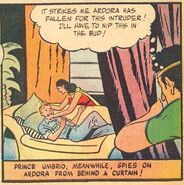 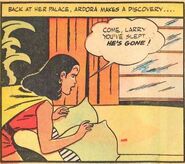 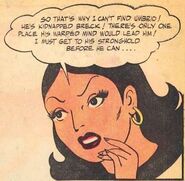 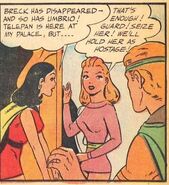 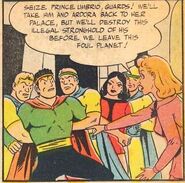 Add a photo to this gallery
Retrieved from "https://femalevillains.fandom.com/wiki/Ardora_(Don_Fortune_Magazine)?oldid=160462"
Community content is available under CC-BY-SA unless otherwise noted.