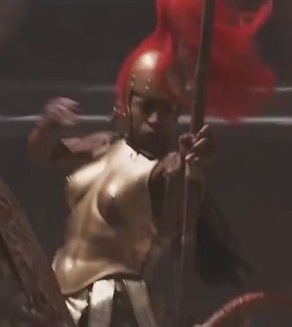 These female archers, with some male assistants who drive their chariots equipped with wheel blades, take part in gladiator shows organized under the reign of the Roman emperor Commodus, main antagonist in the 2000 movie "Gladiator".

Presumed natives of a North African territory of the Roman Empire (Mauretania, Numidia or Nubia), they're used in unbalanced combats in which the opposed side is destined to "lose the battle". In practice, the unbalance is such that it appears that the whole show's objective is to humiliate the strong and virile gladiators of the opposed side (supposed to represent an ennemy faction of Rome) by making them slowly and helplessly slaughtered by a very few women.

In a recreation of the Battle of Zama in which a Carthaginian force had been defeated by a Roman army in 202 BC, the hero Maximus and some other dismounted and lightly armed gladiators (only one pilum and one shield) are supposed to portray the Carthaginians against the female archers on chariots who portray the Roman. After entering the arena, the female archers starts to accomplish their cruel task with great professionalism and a complete absence of mercy, quickly circling around their preys while shooting arrows at them. The twenty or so gladiators are first surprised and disorganized by this attack and fall one by one in front of these elusive women warriors.

The "Carthaginians" (portrayed by some unlucky gladiators, including the hero Maximus) waiting for their losing battle against the "Roman army"

However, Maximus, who turns out to be a remarkable war leader, manages to reorganize the gladiators and puts them into a sort of tortoise formation. Under his instructions, they finally manage to neutralize the chariots one after the other (by breaking their wheels, installing barricades against them, making them collide each other, frightening their horses, killing their male drivers...). Maximus himself destroys one of the last chariots with a horse and a sword seized from the enemy. Most of the female archers and their male assistants are killed in the process, by chariot crashes or decapitated, and the organizer of this gladiatorial combat must apologize to the Roman emperor for this unplanned (and historically inaccurate) defeat of the "Roman army" against "Carthaginians".

The hero finally overturns the battle and even manages to seize a horse
Add a photo to this gallery
Retrieved from "https://femalevillains.fandom.com/wiki/Archers_(Gladiator)?oldid=202294"
Community content is available under CC-BY-SA unless otherwise noted.