Aracne (Pamela Prati) is the evil Spider Queen in the 1985 film The Adventures of Hercules II.

Aracne lives in her cave like dwelling, with several minions around a cauldron. Aracne is wearing a leather corset like outfit outlined in metal rivets. She has a sword in a sheath, attached to a sling that hangs over one shoulder. She wears a gold crown, and has an orange cape.

Aracne entertains Hercules (Lou Ferrigno) in her cave dwelling. However, she quickly turns into a threat and attempts to kill Hercules with her sword, and so Hercules overpowers and strangles her. She turns green and begins to glow, turns into a cocoon like shriveled up blob, and dies. It is revealed that her body contained the the fifth thunderbolt, which Hercules takes. 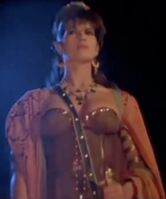 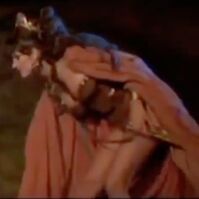 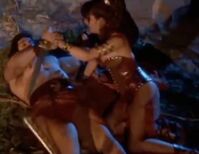 Add a photo to this gallery
Retrieved from "https://femalevillains.fandom.com/wiki/Aracne_(The_Adventures_of_Hercules_II)?oldid=185008"
Community content is available under CC-BY-SA unless otherwise noted.