First impressions of April May gave the appearance of a cute, lively, and flirtatious young woman who likes to tease people and knows how to get her way. She normally does this with her sex appeal, using a combination of ample cleavage, very short skirts, an innocent expression and a cutesy style of speech. When cornered, however, she reveals her true personality: aggressive, sneering and temperamental.

April is the 23 year old secretary of Redd White, the CEO of Bluecorp. Bluecorp is an information-gathering corporation, who often use illegal methods to gather their information, they would then use this information to blackmail important people. These important people include those in the legal system, which made Bluecorp untouchable by the law.

Redd White suspected that defence attorney Mia Fey was investigating him, so he had April plant a wire tap in Mia's office. April's spying revealed that Mia had evidence that could be damaging to Redd.

One night Redd and April booked into a hotel across from Mia's office, April ordered drinks to their room and flirted with the bellboy so that she could create an alibi for herself later. During this, Redd went over to Mia's office and murdered her, also taking the evidence she had. He then told April to call the police and claim she saw Mia's younger sister Maya commit the murder. Maya is eventually arrested and put on trial for her sister's murder.

During the trial the evil April May was called to testify about what she claimed to have seen. She lied and made false claims in order to get Maya found guilty for a crime she didn't commit. Unfortunately for April, defence attorney Phoenix Wright saw through her lies and eventually managed to discover that April was wire-tapping Mia's office. During this, April's sweet and flirty personality vanished, and her true self was revealed to the court, that of an aggressive and temperamental woman.

After these revelations, she was arrested for wire-tapping and as a possible accomplice to murder, as Redd was later found guilty of Mia's murder. 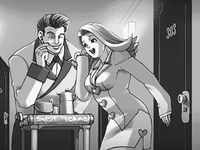 Flirting with the bellboy 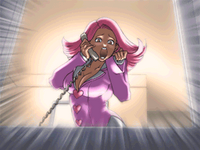 Phoning the police
Add a photo to this gallery

Introducing herself to the courtroom

The "sweet and innocent" April May

Lying to the court by claiming Maya is the murderer

Cracks in her story and personality start to emerge

April May in court, eventually arrested for her crimes
Add a photo to this gallery
Retrieved from "https://femalevillains.fandom.com/wiki/April_May_(Ace_Attorney)?oldid=85601"
Community content is available under CC-BY-SA unless otherwise noted.