Aponi aka The Witch (Stephanie Edmonds) is the main villainess of CryptTV's Stoneheart series. Her backstory revealed that, during the late 1600s, she was a practicing witch known for being a protector of women. While her fate was never explicitly stated, it's implied that Aponi was executed during a witch trial.

Aponi first appeared in the form of an ancient statue, which was being tended to by museum employees Ted and Inessa. After Tim left Inessa to lock up, Inessa cut herself while working on the statue, with her blood seemingly causing Aponi's spirit to awaken inside the statue. A shocked Inessa accidentally knocked over a can of plaster, which Tim blasted Inessa for when he returned to the museum moments later. As Tim further lambasted Inessa for (in his mind) not respecting him, even going as far as to accuse her of sleeping with their boss, Aponi turned to Tim and killed him, bludgeoning him in the head with the statue's stone arm. The film ended with Aponi and Inessa sharing eye contact, the witch pleased with having protected Inessa.

Aponi appeared in her physical form in the other two films of the season, Requiem and New Dawn. Requiem served as Aponi's second chronological appearance, encountering abused youth Rebecca Baker. The film opened with Inessa's sister, teacher Ms. Lexington, showing Rebecca the statue of Aponi out in the forest, recounting how Inessa had told her about Aponi before she died. After touching the statue, Aponi appeared before Rebecca, asking her to join her so she could help protect her from the abuse she faced. Later on, as Rebecca was accosted by Tim (a church member who frequently harassed Rebecca), Aponi appeared and broke Tim's ankle, allowing Rebecca to use the powers Aponi granted her to kill her would-be assailant. In New Dawn (the 2nd released film in the trilogy), Aponi helped Rebecca lure her abusive father, police officer Erik, into an abandoned building. After Aponi showed Erik a flashback of his abuse towards Rebecca and Rebecca verbally stood up to him, Aponi appeared and broke Erik's fingers, disarming him and allowing Rebecca to kill him. Aponi then stood behind Rebecca as she smiled at having gotten justice against her abusive father.

Aponi reappeared in Season 2 of Stoneheart, appearing in its' first film "Big Fish" (airdate July 13, 2018). The film opened by showing that Aponi was still haunting Rebecca, who had become desperate to rid herself of the powers the witch gave her. After Rebecca helped teenage boy Adam as he was being harassed by a group of jocks, however, Aponi set her vengeful sights on the teens. Rebecca tried to persuade Aponi to leave them alone due to them being kids, only for the avenging villainess to state that "poison roots grow poison trees". Aponi then took over Rebecca's body, appearing before one of the jocks before turning the water in his bottle into blood, which he unknowingly poured over himself. After grabbing the jock and telling him that there will "always be a bigger fish", Aponi killed him by snapping his neck, laughing before walking away, allowing Rebecca to revert back to her old state.

Throughout Season 2, Aponi would continue to kill the abusive men in the lives of Rebecca's therapy mates, ignoring Rebecca's pleas to stop. Aponi also encountered twins Abigail and Jessica when they witnessed her kill the jocks and demanded that Rebecca teach them how to channel her powers, only for Aponi to initially scare the girls away with a vision of their parents. In the series finale, "Transference", however, Aponi appeared when the girls kidnapped Rebecca and performed a ceremony to access Aponi and her powers. When therapy member Troy entered, Aponi attempted to kill him, with her ignoring Rebecca's pleas to let him go revealing Aponi's true nature as a sadistic and misandristic murderer rather than a protective figure. After Rebecca angrily denounced Aponi and told her she didn't need her anymore, the evil Aponi killed Rebecca by breaking her neck, claiming she was just like the other women she'd appeared to. After Abigail killed Troy, Aponi decided to bestow her powers to Jessica, with Abigail becoming enraged at being rejected by Aponi. Abigail then attempted to kill Rebecca, only to be stabbed to death by her sister as Aponi looked on approvingly. 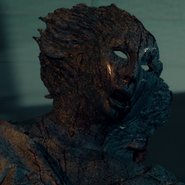 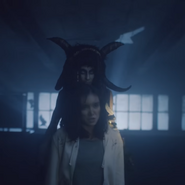 Aponi with Rebecca as she confronted her father

Aponi admiring her newest "protege"
Add a photo to this gallery

Retrieved from "https://femalevillains.fandom.com/wiki/Aponi_(Stoneheart)?oldid=167334"
Community content is available under CC-BY-SA unless otherwise noted.