Start a Wiki
watch 01:48
The Loop (TV)
Do you like this video?
Anya (Anna Bazarkina) is a minor antagonist in the 2011 episode "Operation: Get Sandra West!" (episode 9) for the action comedy web series "The Adventures of Superseven", which appeared on YouTube from 2011-2015.  Get Sandra West! was episode 9 for the series.

Anya is an assassin for the criminal organization T.H.E.Y.  She is assigned to take out Sandra West (Olivia Dunkley), a former agent for T.H.E.M.

In a relatively deserted back alley, Anya and Sandra are walking towards each other.  Both women are dressed in very short skirts. As Anya passes by, she suddenly reaches into her purse and pulls out her pistol to shoot Sandra.  However, Sandra beats her to the punch and shoots Anya over her left shoulder without even looking.  Anya stumbles and attempts to get off another shot, but Sandra hits her again.

When Sandra reaches Anya lying on the ground, Anya asks her how she knew.  Sandra tells her that her eyes gave her away, and also the fact that she was still wearing her T.H.E.Y. name tag on her blouse.  Knowing she messed up, Anya reached into her purse and pulled out a cyanide capsule and swallowed it, vowing that she would never take her alive.

Sandra then placed Anya's body in a car, for comic effect, since there was no other place to hide a dead body. 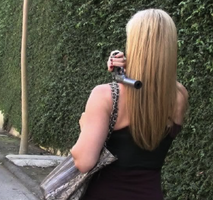 Add a photo to this gallery
Retrieved from "https://femalevillains.fandom.com/wiki/Anya_(The_Adventures_of_Superseven)?oldid=150365"
Community content is available under CC-BY-SA unless otherwise noted.