Annie was introduced early in the film as a convicted murderess, having been in prison for eight years for killing a couple, Lucy and Frank Miller, who had been renting a room in her mother's old home. Annie's daughter, Natalie, was 10 years of age at the time, and it was her testimony that led to Annie's arrest and conviction. Furthermore, Natalie visited Annie in prison, with Annie stating that she was attempting to protect Natalie on the day in question, though she wouldn't reveal from who or what.

All the while, Natalie had been a patient of Dr. Desmond Welk and also was living with her paternal aunt, Caroline Weaver, in the eight years that passed. She had been having sleepwalking fits due to her medication (which Welk prescribed her), while having trouble remembering what happened on the day of the murders. The film's progression saw a pair of copycat murders being committed: Kent (a student who had been bullying Natalie) and Owen Moore (Natalie's boss) were both killed with a cleaver, after which buttons were placed over their eyes. The murders matched the Millers' deaths exactly, and after police captain Maxine Lawrence received Natalie's drawings (which showed Lucy and Frank's corpses) from John Matthews (the officer on duty that night), not only was Annie released, but Natalie ended up becoming the prime suspect.

Following her release, Annie visited Caroline and made a demand to see Natalie, who began to realize that she may have actually killed the Millers--as she envisioned a flashback of herself giving Annie the cleaver. During the mother-daughter reunion, Natalie voiced her concerns that she was a murderess, with Annie stating to her daughter that she had a temper as a child and adding that she would do anything to protect her. However, Natalie's search through Annie's things revealed prison letters written by someone whose handwriting matched Desmond's, and that led to her realizing that he was the copycat killer; he committed the two murders to get Annie out due to his infatuation with her.

After Natalie escaped being caught by Lawrence, she returned to the house to see Welk engaged in a makeout session. Annie began turning heel with the revelation of their relationship, as she interrupted Desmond's attempt to distract Natalie by telling her that her daughter knew and was smarter than he gave her credit for. As it turned out, Annie really did kill the Millers, and after she was visited by Welk in prison, they schemed to commit copycat murders and frame Natalie as well. Natalie expressed shock over her evil mother's actions by informing her that she was her daughter, but in response, Annie snarled at Natalie over the fact that she testified against her, adding that Natalie took away her life and that she wanted to do the same to her own daughter, cementing Annie's heel turn. At that moment, Annie stabbed Welk to death with a knife and pleaded with Natalie to stop, continuing her frame-up job.

Afterwards, the evil Annie chased Natalie into the bedroom with the knife, making stabbing motions through the covered up furniture in her attempt to find her daughter, who remembered the all of the details of the Millers' murders, which included Annie rubbing her victims' blood on her daughter. After Natalie saved Caroline from Annie, she asked her mother why she committed the murders, with the maniacal villainess stating that she hated the Millers for loving Natalie, and she also hated Natalie for playing along with them. She attempted to goad her daughter into stopping her with the knife, and also boasted that she would pose as an innocent woman who failed to stop her "evil" daughter from killing Welk and Caroline. At that moment, Annie took the knife from Natalie and made an attempt to kill her own daughter, only for Lawrence to enter and shoot the villainess (non-fatally) before handcuffing and arresting her once and for all. As this happened, Annie could do nothing but stare at her daughter and her sister, realizing that her attempts to get away with her crimes had failed for good. 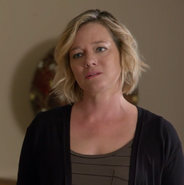 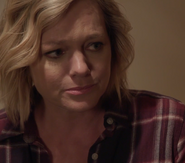 Annie during her reunion with Natalie
Add a photo to this gallery
Retrieved from "https://femalevillains.fandom.com/wiki/Annie_Weaver_(Am_I_a_Serial_Killer%3F)?oldid=201426"
Community content is available under CC-BY-SA unless otherwise noted.