Annie Leonhart, is a graduate of the 104th Training Corps and former member of the Military Police Brigade. Her exceptional skill with swords and unarmed combat earned her the 4th rank, but she is noted to be a lone wolf that struggles to work with others. Along with Reiner Braun and Bertolt Hoover, she possesses the ability to shift into a Titan and serves a currently unrevealed organization operating outside the Walls. Trained from an early age by her father, she was sent to carry out a mission against humanity. As the Female Titan, she served as a major antagonist of the series prior to being exposed and defeated by the military. After her defeat, she crystallized herself and was left in a comatose state. She is currently being held deep underground under custody of the Survey Corps.

Annie is a girl of considerably short height with a small, yet very muscular build and physique. She has moderately short hair that is often tied at the back with her right fringe mainly draping over the right side of her face (though she tends to push it to the side on occasion; possibly for better visibility). She has an oval-shaped face, blonde hair, blue eyes, a Roman nose and pale complexion. Her hair color is noticeably paler than most other blonde-haired characters and when untied, her hair reaches down the nape of her neck. Her eyes, although of considerable size and proportion, often have a sullen vibe to their appearance. Annie's casual attire mainly consists of a hooded sweatshirt underneath a jacket accompanied by dark gray pants. She is often seen in the Training Corps uniform and then the Military Police Brigade uniform after graduation. Though Annie often wears hooded sweatshirts as part of her standard attire, she wears her signature white hooded sweatshirt as part of her standard military attire. During her missions as the Female Titan, it is implied that she always wears her ring which has a small, folding blade on her right index finger; using it as her primary source of causing self-injury in order to transform into her Female Titan form at any time.

Annie's appearance as a Titan changes quite drastically, though her overall physique and facial features remain mostly the same. In the anime, her body consists mainly of exposed muscle, in which there is a noticeable limited amount of skin coverage across her body, and fingers made out of bone. In the manga, she has skin the same as Eren's Titan Form. Along with a massive increase in height, her face is laden with muscle lining, notably underneath her cheeks, giving her the capability to stretch her mouth far more than it seems, along with yellowish teeth. Compared to the majority of other Titans encountered, Annie's Titan form seems much more physically fit and stronger, bearing a lean build with visible muscle definition and a feminine form. 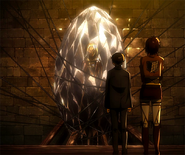 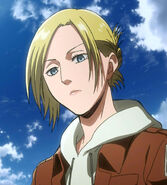 Add a photo to this gallery
Retrieved from "https://femalevillains.fandom.com/wiki/Annie_Leonhart_(Attack_On_Titan)?oldid=194409"
Community content is available under CC-BY-SA unless otherwise noted.