Annette Cole (Kate Burton) was the main villainess of "Bully", episode 12.18 of Law & Order: SVU (airdate February 23, 2011). She was the president and CEO of Luscious Grape Distributors, a prestigious wine and spirits importer where Corinne Stafford worked. Furthermore, she founded the business 15 years before the episode's events alongside her lifelong friend Ellen Sazelin, who acted as Luscious Grape's CFO. After Ellen was found murdered in her apartment, Annette acted heartbroken upon learning about her death, and so did her employees.

However, after Ellen's apartment was broken into and ransacked by Luscious Grape employee David Watson, Detectives Olivia Benson and Elliot Stabler found a flash drive containing 20 webcam videos Ellen recorded at work (which is what David was trying to find). All of the videos displayed Annette's narcissism and sociopathy, which manifested whenever she verbally abused all of her employees and also during the numerous instances when she angrily slapped Ellen—who was the main target of her friend's harassment. Furthermore, Annette's villainous reveal came when Benson and Stabler watched one of Ellen's videos.

When the villainess was brought in by Benson and Stabler and confronted with the video they watched, she first claimed that she and Ellen were just having a disagreement and that the video was doctored before claiming Ellen was arrogant and was also responsible for her rage towards her. The callous woman also denied killing Ellen and coldly insulted her deceased friend before storming out of the interrogation room, telling the two detectives to contact her lawyer if they wanted to talk to her again. Later on, the videos of Annette's abuse were played on the news and quickly went viral online; Ellen had sent them out in a package to MSNBC on the night of her death after having dinner with her abusive friend. As she was swarmed by reporters outside Luscious Grape, Annette accused Benson and Stabler of leaking the videos and declared that she planned to sue them for emotional distress before aggressively pushing her way through the crowd after the pair refused to help her get through said crowd.

Wanting to further traumatize her victims, the malevolent businesswoman had her lawyer arrange for a press conference to explain her behavior, requesting that Benson and Stabler attend said conference. The villainess began the conference with a seemingly apologetic demeanor, but soon began maliciously hurling insults at her business partners, her customers, the press, and also the NYPD—accusing her partners of abandoning her in her time of need and the NYPD of hounding her. Annette also informed the employees of Luscious Grape that she had fired all of them, claiming that they had betrayed her and were just as useless as Ellen, who she accused of destroying her company. At the end of her final crazed rant, Annette pulled out a gun and shot herself under the chin, delusionally claiming that they all made her commit suicide just before pulling the trigger. It was later revealed by Stabler that she had also bequeathed her entire estate to her dog as the final twist of the knife to her employees. 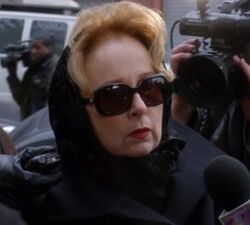 Annette after her true colors were exposed to the public
Add a photo to this gallery
Retrieved from "https://femalevillains.fandom.com/wiki/Annette_Cole_(Law_%26_Order:_SVU)?oldid=134098"
Community content is available under CC-BY-SA unless otherwise noted.