A wealthy gated community called "Sherwood Park" is being plagued by jewel robberies. Private detective team Honey West  (Anne Francis) and Sam Bolt (John Ericson) are hired by one wealthy resident and victim to try to discover the culprits and recover the stolen items. They find the burglar is a mentally ill young man who thinks he's Robin Hood (Edd Byrnes). When "Robin" is murdered, the detective duo conclude that a psychiatrist who lives in Sherwood Park, Dr. Ames (Severn Darden), is the real criminal -- he had been "manipulating "Robin", his patient, getting him to commit the robberies. Ames has been assisted in his crimes by Annette, the maid to the woman who hired Honey and Sam.

At his mansion, Ames and Annette are about to make their escape with their ill gotten gains when Honey and Sam burst in on them. While Sam takes on Ames, Honey deals with Annette. Honey foils the villainess in her initial attempt to escape. Annette tries to fight back -- she attacks Honey with a tea trolley, hurling various items from it at the private eye. The tall and fit judo enthusiast Honey evades all these assaults. At one point Honey brings down a fleeing Annette with a leg tackle. Finally, the villainess, who is rather battered and shaken by now, takes a paper knife and tries to stick it into Honey, who dodges, slams Annette's arm over her leg to make her drop the knife, then punches the bad girl in the face, causing her to spin round and crash to the ground knocked out.

Weapons -  Knife. She also uses various makeshift weapons such as a lamp in the fight with Honey.

Fate - Defeated in a fight with the heroine, who knocks her out. Arrested.

Note - There is a continuity error which is seen in the different positions of the knocked out  Annette in gallery images 8 and 9. 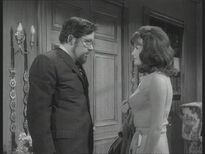 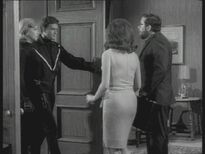 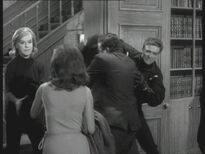 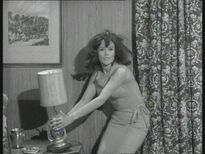 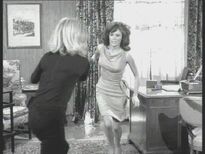 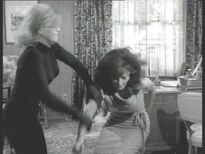 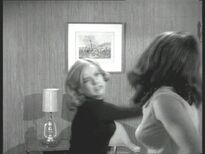 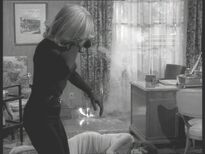 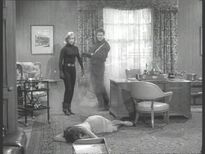 Add a photo to this gallery
Retrieved from "https://femalevillains.fandom.com/wiki/Annette_(Honey_West)?oldid=213015"
Community content is available under CC-BY-SA unless otherwise noted.