Start a Wiki
watch 01:50
The Loop (TV)
Do you like this video?
Annabel Leigh is the villainess of "Graveyard Shift", case #44 of Criminal Case: Mysteries of the Past, the 4th season of the crime solving game Criminal Case (release date September 21, 2017). She was the girlfriend of Edgar Woe, a poet found dead in a cemetery with his body drained of blood.

Annabel initially appeared devastated by Edgar's death, claiming her relationship with Edgar was idyllic and that he dedicated all of his poetry to his love for her. She continued to argue the same when the player and Isaac Bontemps discovered a poem of Edgar's that detailed him breaking Annabel's heart, claiming that Edgar saw her as "his muse for every shade of love".

But ultimately, Annabel's meek demeanor was revealed as a mask for her true personality as a vengeful villainess. Sometime prior to the case's events, Annabel discovered love letters Edgar was writing for other women, revealing her boyfriend had been a serial adulterer for years. Enraged at her lover's treachery, the evil Annabel killed Edgar after finding him passed out drunk in the cemetery, poking holes in his neck with a syringe before using a pump to drain the blood out of his body, wanting to set his death up to look like a vampire attack.

Annabel left strands of her hair on the pump, with this being among the evidence proving her as Edgar's killer. When confronted, Annabel initially continued to feign innocence before angrily admitting to the truth, proclaiming that Edgar deserved to die for cheating on her and stating that draining her lover's blood felt satisfying to her. Annabel was arrested and sentenced by Judge Justin Lawson to life imprisonment, much to the villainess' dismay. Annabel later told the player and Maddie O'Malley from within prison that she had been given the idea of staging Edgar's death as a a vampire attack by "The Devil", a mysterious figure in Grim Chapel who was assisting people in staging supernaturally influenced crimes, having been provided the blood pump by the anonymous figure. 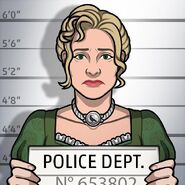 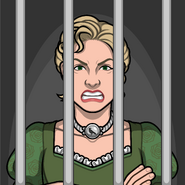 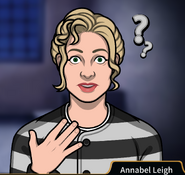 Add a photo to this gallery
Retrieved from "https://femalevillains.fandom.com/wiki/Annabel_Leigh_(Criminal_Case)?oldid=93582"
Community content is available under CC-BY-SA unless otherwise noted.