Start a Wiki
watch 01:48
The Loop (TV)
Do you like this video?
Anna Warren (Amy Rutberg) is the hidden villainess of "Charm School", episode 2.06 of NBC's Taken (airdate March 9, 2018). She was the wife of Senator Mitchell Warren, a former war hero who was suspected of having ties to Russia. Her backstory revealed that she was originally a campaign employee for Mitchell, later striking a romantic relationship when she began to bond with Mitchell and his son Bret in the wake of his wife's death.

The episode began with Anna seemingly being abducted by several skull-masked men while Mitchell was campaigning in Belgium, with the lead kidnapper ordering Mitchell to "go home" or they would kill Anna. Anna's abduction was attributed to the anti-Russian nationalist group Red Hate, and was found by CIA agents Bryan Mills and Santana bound and gagged in the attic of a house being occupied by nationalist Sergei Ivanovic (who appeared to flee the scene before he could be arrested). After being rescued, Anna was reunited with a relieved Mitchell, with Anna insisting that Mitchell not cover up the truth about her abduction and instead focus on the event he was holding in the hotel later that evening, claiming she didn't want to jeopardize his Summit campaign.

However, it was later revealed that former Russian FSB Vladamir Korchenko had been the true orchestrator behind Anna's kidnapping, with the reveal coming after he attempted to kill Michael Fortnam (who worked for Mitchell's campaign) in the hospital following an attempted neurotoxin poisoning at the hotel event he was at with the Warrens. After being subdued and restrained by Bryan, he and Christina Hart interrogated him, with Vladamir eventually revealing the truth about Anna when faced with the Red Hate organization: Anna was a Russian spy sent to America as a child to act as a spy for her country, eventually leading her to seduce Mitchell in adulthood in order to accomplish her mission (with implications saying she had poisoned Mitchell's first wife to kill her). Working with Vladamir, Anna framed Sergei for her "abduction" and had Fortman leak the story, killing Sergei and attempted to kill Fortman to cover their tracks.

As Vladamir informed Christina and Bryan about Anna's true nature, as well as how she was ruthless and would stop at nothing to avoid capture, the villainess drugged Mitchell in their hotel room before packing her things and leaving, shooting and killing Mitchell's bodyguard Theo as she went. Anna was later tracked down to a harbor as she prepared to flee via boat, being caught by Bryan as she sat and drank champagne. After Bryan informed Anna that the CIA was planning to deal with her and stopped her from grabbing the gun in her purse, the evil Anna attempted to scream and make it appear Bryan were attacking her, only to be knocked out with an injection by Bryan before she could (passing it off as her having too much to drink). The CIA ultimately made a deal with Russia to turn Anna over into their custody, while Mitchell claimed to the public that Anna died of an illness she'd kept secret. Sometime prior to her capture, however, Anna texted Bret saying she was proud of him, with Bret's response saying he missed her ending the episode on the implication that Bret had been turned into a spy by his stepmother.

Anna posing as a kidnapping victim

Anna during her villainous reveal 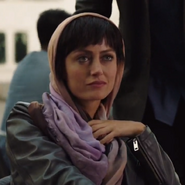 Anna as a brunette
Add a photo to this gallery
Retrieved from "https://femalevillains.fandom.com/wiki/Anna_Warren_(Taken)?oldid=161744"
Community content is available under CC-BY-SA unless otherwise noted.