Start a Wiki
watch 01:48
The Loop (TV)
Do you like this video?
Anna Mill (Sasha Alexander) was the main villainess from "Caretaker," episode 20.07 of Law & Order:  SVU (airdate November 1, 2018). She was a lawyer and the wife of Julian Mill, as well as the mother of their two children, Rachel and Charlie.

Julian and Rachel were found murdered in their home, with a witness finding Charlie wounded with a pair of stab wounds; wounds that Charlie (as revealed by Dominick Carisi) fatally succumbed to later on. Olivia Benson and Amanda Rollins later interviewed Anna, who broke down over the loss of her family, while stating that Julian had no enemies in response to Benson's query about anyone who would want to harm him. As the episode progressed, the Mill family's nanny, Delores Alverez, was suspected of the murders, as it was originally believed that Julian and Delores were having an affair. Though Anna spoke fondly of Delores, she later believed that Delores could be the killer, as she voiced her regret over hiring a nanny.

However, a further investigation revealed that Anna was involved in a lucrative scam where she bilked her clients out of millions of dollars, though after the discovery, Benson stated that while Anna was greedy and a thief, she wasn't a killer. At that moment, Fin Tutuola distributed Anna's tennis shoes, which were revealed to have Rachel's blood on them. Fin and Benson later presented the evidence to Anna during her interrogation, with Anna stating that she wears the shoes to go to work, only to later break down when Fin informed Anna that Rachel's blood was on the right shoe. Now caught, Anna revealed to Benson that she killed her family, stating that she had to do it and they were better off without her.

Though Anna attempted to claim insanity, the details were revealed in full following Anna's confession. Anna was facing jail time for her monetary scam, and under the belief that her family was suffering and would continue to do so without her, she decided to kill them. Late at night, the evil Anna killed her husband and children while they all slept, stabbing Julian a dozen times, Rachel three times, and Charlie (who died the following morning) twice. The deranged villainess callously covered up her role and allowed Delores to be accused of the murders, and it was later in the episode that Delores informed Benson that Anna kissed her and said goodbye to her shortly before she killed her family. Despite Delores' info indicating premeditation, Anna continued to claim that she wasn't in her right mind in her testimony, claiming that she cracked under the pressure of attempting to be a woman who can have it all and failing. She also stated that she was "outside of her body" and watched another nonexistent woman kill her family.

Anna was facing second-degree murder charges, but the trial ended with Anna only being convicted of Julian's murder, while being acquitted of the murders of her children. Benson discussed the result with Peter Stone, with both agreeing that the partial conviction was due to the jury refusing to believe that a sane woman could kill her children. At the end of the episode, Olivia received a phone call and later informed Stone about what she was told:  Anna had committed suicide in her jail cell, doing so by hanging herself.

Anna during her confession 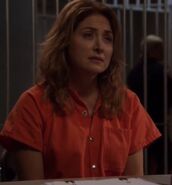 Anna inside her jail cell 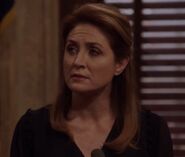 Anna during her testimony
Add a photo to this gallery
Retrieved from "https://femalevillains.fandom.com/wiki/Anna_Mill_(Law_%26_Order:_SVU)?oldid=193097"
Community content is available under CC-BY-SA unless otherwise noted.