Start a Wiki
watch 01:48
The Loop (TV)
Do you like this video?
Anna Mannheim (Inge Jaklyn) was one of three interogators in the 1968 episode "To the Gestapo with Love" for the TV series, "Hogan's Heroes".

When a bridge in the area is blow-up, Maj. Hochstetter believes that someone in the Stalag 13 is responsible.  He calls in the newest Gestapo interview team to get to the bottom of the sabotage.  The new team is made out of three lovely ladies, Inge Wagner (Sabrina Scharf), Heidi Baum (Christiane Schmidtmer), and Anna. Inge appears to be the lead interogator and is a brunette dressed in blue.  Heidi is a voluptuous blonde dressed in orange, and Anna is a petite blond dressed in green.  The team uses their sex appeal to pry information out of their prey.

LaBeau (Robert Clary) is the first to appear before the women, and he is advised to be extremely careful in what information he volunteers.  He is well taken care of by Inge and Heidi, who take turns snuggling with him.  After headed back to the barracks, he is surprised to find out how much information the girls were able to get out of him.

Next up is Col. Hogan (Bob Crane), who Inge takes out of the compound to win his trust.  However, they stop at another bridge in the area, and while they are kissing, Hogan sets a timer to blow up the bridge.

Hogan has Kinchloe (Ivan Dixon) call in a favor to obtain background information on all of the three girls.

In the next night, Hogan meets Inge for a second session.  He makes the comment that people are the same the world over, and that London is probably very similar to her home town of Berlin.  This stops Inge in her place, and she asks him how he knew she was from Berlin.  He then tells her that Heidi told him.  Inge asks what else Heidi told him about her.  Hogan mentioned that she had been through two bad marriages, her brother was a communist, and her father was kicked out of the Nazi party for embezzling money.

When Inge began shouting at Heidi, Hogan told her to not jump on Heidi.  After all, it was you who told me about Heidi's mothers problem with schnapps.  The two began pushing each other, and Hogan had to step in to break them up.  Then Anna came out of the bedroom trying to stop the fighting.  At that moment, Maj. Hochstetter and Col. Klink came in asking what all the noise was about.  Anna explained that the two girls had given intimate details about each other to the prisoner.  Hogan than spilled the beans that he heard Anna was dating SS Capt. Braunschweiger at the same time that she is seeing Maj. Hochstetter.  In addition, Hedi is also seeing the captain.  This set off another fight between Anna and Hedi.  Maj. Hochstetter had finally had enough of this, and told the girls to get out of here.  This would be the end of the new interrogation team. 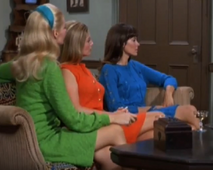 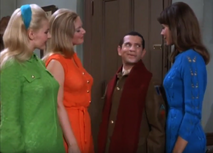 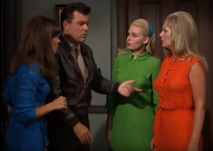 Retrieved from "https://femalevillains.fandom.com/wiki/Anna_Mannheim_(Hogan%27s_Heroes)?oldid=143016"
Community content is available under CC-BY-SA unless otherwise noted.