Anna Gram is a henchwoman/moll to the arch villain The Riddler in the 1960s live action Batman TV series.

Episodes - Batman's anniversary/A riddling controversy (first broadcast in the USA on the ABC network on 8/9 Feb 1967).

The evil Riddler (John Astin) is stealing large amounts of money - including everything which has been awarded to Batman to donate to his favourite charities during the celebrations for the anniversary of the caped crusader joining Gotham police department - in order to purchase de-molecularizer weapon for $3,000000 from an embittered renegade scientist. After acquiring the weapon, the Riddler then makes blackmail threats to the city authorities, demanding all criminals are released from prison and the crime laws are abolished - or he will start to destroy Gotham with his new and deadly super weapon, commencing with police headquarters. Batman foils the plot using a clever climatological method, and tracks Riddler to his hideout, where the arch villain and his gang are defeated in a fight and arrested.

Anna Gram is among the series incorrigible bad girls, one who doesn't (like a few of the arch villain's molls) come to embrace the side of virtue at some point in the proceedings. Greedy and ruthless, she's totally in tune with the Riddler's criminality. However, unfortunately, unlike some other henchwomen of this type (Undine, Molly, Lydia Limpet, Chickadee, Pauline, Lisa etc) she doesn't really have much to do apart from hang around with Riddler and laugh along with him over his evil machinations. Her biggest moment is when she tries to flee from Riddler's hideout as the gang are defeated in the fight, is foiled by the arrival of the police, struggles wildly when Chief O'Hara grabs her, and kicks the Boy Wonder hard on the leg (indeed, she tries to do it twice!). The chief remarks she's probably the "toughest of the bunch", and a furious Anna snarls he's a "blue coated baboon". There is more indication here than is usual in the series of this moll/henchwoman being a "love interest" for the arch villain, with the Riddler pulling Anna to him in an embrace more than once.

Appearance - A slim, very pretty red headed white woman in her 20s. In most of the two episodes, Anna wears a multicolored catsuit decorated with what might be meant to represent pieces from a jigsaw puzzles. She wears knee high blue boots. There is one scene at the beginning of the episode where members of the Gotham City Dairymen's League are honoring Batman in a luncheon anniversary.  The speaker introduces Miss Anna Gram as Milkmaid of the Month, and she rolls into the party a golden calf on a tray which contains $200,000 in cash.  Anna is wearing a pink corset and white skirt, which resembles a French Maid outfit.  She had pink boots on which accentuated her lovely legs, and a pink choker necklace on. 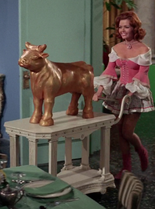 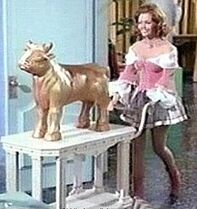 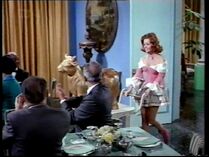 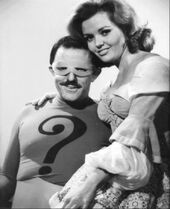 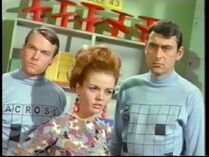 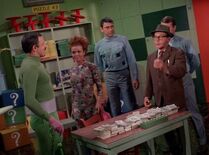 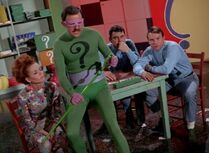 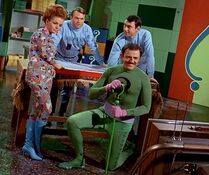 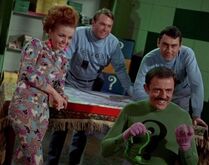 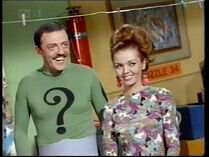 Anna Gram and the Riddler (Deanna Lund with John Astin) 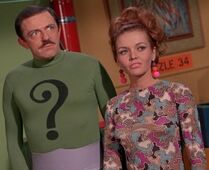 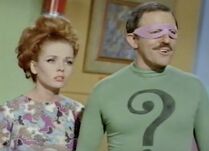 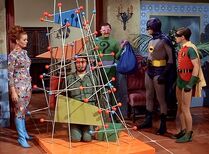 A victium of Riddler in a Riddler trap! {Based upon a Batman-Riddler cover [Comic # 140]} 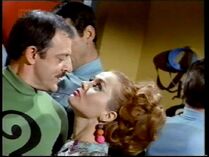 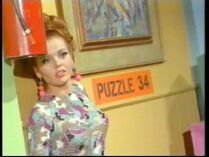 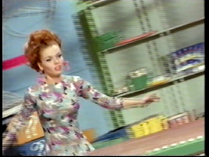 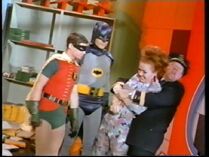 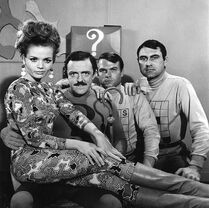 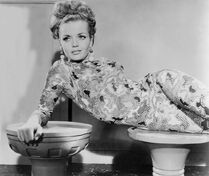 Add a photo to this gallery
Retrieved from "https://femalevillains.fandom.com/wiki/Anna_Gram_(Batman)?oldid=178566"
Community content is available under CC-BY-SA unless otherwise noted.