Start a Wiki
watch 01:51
The Loop (TV)
Do you like this video?
Anna Boudreau (Clare Carey) is the main villainess from NCIS: New Orleans' second season opener, "Sic Semper Tyrannis" (airdate September 22, 2015). She is the ex-wife of militia leader Brant Boudreau, who was nicknamed "Father."

However, Anna believed that Brant was more about money than their actual message, and a year prior to the episode's events, the evil Anna shot and killed Brant. With the help of Zed Hastings (Brant's second-in-command), the villainess recruited members using a video of Brant. The pair later colluded to steal a guidance chip from a missile, which had access to the locations of every military asset. Anna's plan was to sell the chip to every enemy of the U.S.

Percy and LaSalle first encountered Anna (who was armed) at her home, and she posed as a fragile woman who was in fear of Zed. It was in the final scenes that Anna's role as a militia villainess was revealed, and she would later be encountered by Pride, who found the chip in her purse. When asked about the amount she would be paid, Anna stated that money had nothing to do with it, and she killed Brant because he was in the way. The maniacal villainess also said that all of America's enemies and the militia shared a common hatred of the U.S. Government, while boasting that they will easily prevail while keeping them occupied. Following her twisted message, Anna was handcuffed and arrested by Pride. 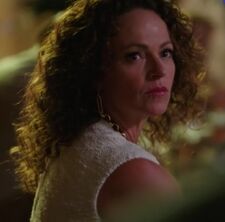 Anna handcuffed and arrested by Pride
Add a photo to this gallery
Retrieved from "https://femalevillains.fandom.com/wiki/Anna_Boudreau_(NCIS:_New_Orleans)?oldid=181072"
Community content is available under CC-BY-SA unless otherwise noted.