Start a Wiki
watch 01:48
The Loop (TV)
Do you like this video?
Anna (Rayisa Kondracki) is a villainess from the 2018 Lifetime film, My Husband's Secret Life (alternately titled, Sleeper; airdate March 25, 2018).

Anna was introduced as a woman who appeared into the home of Freddy Jones and his wife, Jennifer Jones (the film's main protagonist), having broken into the house before hiding out once she was spotted by Jennifer. After Freddy was run down by Arthur Stern and hospitalized, Anna was spotted by Jennifer, who chased her before Anna reached an elevator and made her escape.

It was revealed that Anna was a Russian spy, as was Freddy, whose real name was Sacha Volkov--the son of noted spy Sergei Volkov. Anna's reveal came when she was shown meeting with Barbara, Freddy/Sacha's handler who was posing as Freddy's mother, as they discussed killing Stern. After visiting Freddy in the hospital, the villainess went to Stern's home and shot him to death with a silencer, with Jennifer following Anna and hearing the gunshot. Jennifer pointed her own gun at Anna, who revealed her history with Freddy (they had been friends since they were 10) and snatched the weapon from her possession, but stood down when Jennifer revealed that she was pregnant. Anna stated that she couldn't kill Jennifer because Freddy wouldn't forgive her, after which Jennifer knocked out Anna with a statue.

Later on, the evil Anna appeared at the hospital and searched for the couple, after which she phoned Barbara and informed her that they had escaped. It was revealed that Anna had a list of sleeper agents she was set to give to Freddy, who turned down Anna's request to go back to Russia with her. The film's climax saw both Anna and Barbara hold Jennifer at gunpoint after she shoots Freddy (later revealed as a ruse as Freddy wore a vest); after which police arrived and arrested both women, with the epilogue revealing that they were both sent back to Russia. 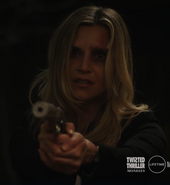 Add a photo to this gallery
Retrieved from "https://femalevillains.fandom.com/wiki/Anna_(My_Husband%27s_Secret_Life)?oldid=206100"
Community content is available under CC-BY-SA unless otherwise noted.