She attempts to murder a witness, and in the final the protagonist, but her single true killing of a person could be considered an act of self defense. She is kicked out of boxcar by the protagonist, after she repeatedly released the trigger of an empty pistol on him and is picked up by the police. 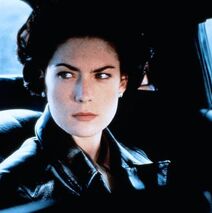 Add a photo to this gallery
Retrieved from "https://femalevillains.fandom.com/wiki/Ann_McCord_(Red_Rock_West)?oldid=130047"
Community content is available under CC-BY-SA unless otherwise noted.