Anjulie was a witch who seduced and overthrew the king of a barbarian world. First appearance and death in Excalibur (1988) # 16. Art by Alan Davis.

Ambitious and attractive, Anjulie used her beauty to seduce powerful men to gain a position of influence. She ruled over a large army and an array of servants with a tyrannical fist. Those who served Anjulie were imprisoned or put to death for any minor infraction which displeased her. She was willing to sacrifice her own world to gain power by serving the creature of fundamental evil.

Anjulie possessed extensive knowledge of the arcane arts. She was able to summon an unnamed creature of fundamental evil to her world. She served that creature in draining her worlds primal life force and performed ritual sacrifices.

Anjulie’s past on the planet of Barsoom [alternate reality version] is unknown. She used witchcraft to summon a creature of raw and fundamental evil into her dimension. As the creature's servant, she would help it achieve total domination by draining the planet’s primal life force. To do this she would need people to ritually sacrifice. Anjulie traveled to the royal citadel and met with the King, whom she easily seduced with her feminine charms. After she had successfully overthrown the king, she made him into her slave while his daughter Kymri was banished from the citadel.

While traveling on her imperial cruiser, Anjulie was attacked by Kymri and her band of pirate warriors. Kymri and her men slayed Anjulie's guards and was about kill Anjulie and end her cruel reign. Suddenly from above Kymri was accidentally knocked down by the dimension hopping Nightcrawler [the Excalibur team was lost and scattered in the multiverse]. Seeing the beautiful Anjulie, Nightcrawler incorrectly assumed she was the "damsel in distress" and defeated Kymri. For his trouble, Kurt got knocked unconscious by Anjulie herself.

Anjulie brought Nightcrawler and Kymri back to the citadel where Kymri was locked away in the dungeon. She, however, decided to keep Nightcrawler as a new plaything and had him brought to her personal quarters.

Unaware who had knocked him out, Nightcrawler was recovering in a bath when the scantily dressed Anjulie appeared. Wanting to thank the warrior for saving her she dove into the bath, lost her clothing and kissed Nightcrawler in a romantic embrace. Afterwards the two got dressed and enjoyed each other's company until her servant Pica poured her a glass of wine and accidentally spilled a drop on her hand. Pica shuddered in fear as he knew even such a minor mistake would mean certain death. Noticing the furious look in Anjulie's eyes Nightcrawler quickly took a hold of her hand and kissed the spilled drop away. She seemed to let it go, but secretly then told Pica “I’ll deal with you later”.

Later that night Anjulie summoned her master. The creature then captured the other Excalibur members, whose mutant nature provided him a "glorious" feeding. Anjulie watched on a platform as her master fed on the mutants. Nightcrawler and Kymri arrived to stop them, Anjulie exclaimed to Nightcrawler “How could you betray me so”, showing apparently she had developed some feelings for him. While trying to get at Anjulie, Kymri killed her servant guard only to find the disfigured man was her brainwashed father, the former king. While she mourned leaning over her father Anjulie grabbed a knife and leapt towards Kymri to kill her. As Anjulie lunged, she was stabbed to death in the back by Kitty Pryde. Anjulie’s lifeless body fell off the platform into the abyss of the creature’s dimensional portal. 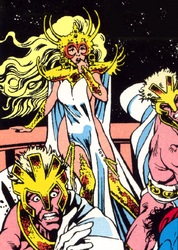 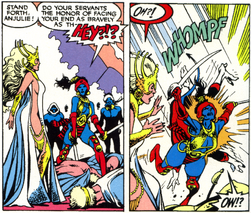 Anjulie is about to be executed but saved by luck 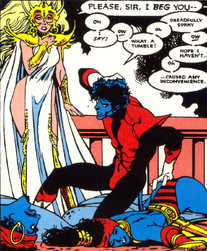 Anjulie's evil revealed when knocks out her savior

Do with me as you please 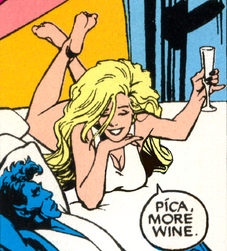 Kurt attempts to soothe her anger 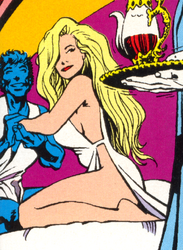 I'll deal with you later Pica 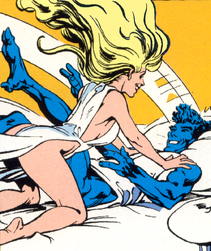 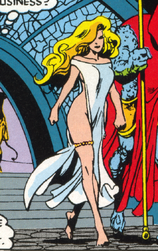 Anjulie goes to summon the creature of fundamental evil 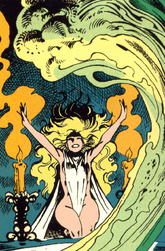 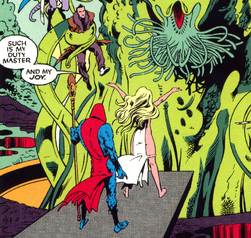 Anjulie is 'betrayed' by Nightcrawler 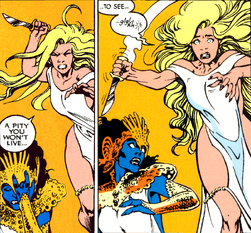 Anjulie lunges with knife at defenseless Kymri, but.. 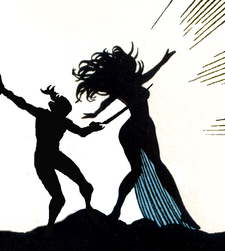 ... is stabbed in the back by Kitty Pryde 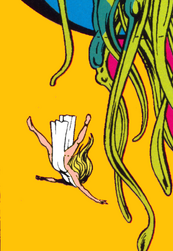 Lifeless Anjulie falls into the abyss
Add a photo to this gallery
Retrieved from "https://femalevillains.fandom.com/wiki/Anjulie_(Excalibur)?oldid=202110"
Community content is available under CC-BY-SA unless otherwise noted.