Start a Wiki
watch 01:51
The Loop (TV)
Do you like this video?
Angie Charles (Dylan Tays) is a villainess from "Trapped," episode 2.11 of CSI:  NY (airdate December 14, 2005). She is a photographer and the ex-girlfriend of exotic dancer Joanna "Kandy" Kelton.

Angie and Kandy dated for two years, but the relationship ended when Kandy cheated on Angie with her club's manager, Andy Kula. Angry and bitter over the break-up, Angie posted Kandy's photo on a cheaters website, which angered Kandy, leading to an argument between the two women. Less than a week later, Angie met Kandy outside the club, leading to another argument when the site was brought up. The verbal spat became physical when both women traded slaps, and afterwards, Angie turned heel and tossed her ex-girlfriend onto a krieg light, which burned her to death.

Shortly after killing Kandy, however, Angie's eyes became burned by the bright spotlight, but even so, she covered up her actions during her encounter with Mac Taylor and Lindsay Monroe, claiming that she last saw Kandy a week prior. However, Sheldon Hawkes discovered amber on the spotlight, and that tied Angie to the scene, as Angie had a necklace made of amber from her photoshoot in South America. Angie's second encounter with Mac and Lindsay had the villainess denying killing Kandy, but after seeing that the recent photos she took were out of focus, Lindsay figured out that her eyes were burned recently. Afterwards, the evil Angie confessed to killing Kandy, claiming that she loved Kandy and it was an accident, counteracting against Mac's claim that Angie was a scorned villainess. Mac later handcuffed and arrested Angie for killing Kandy. 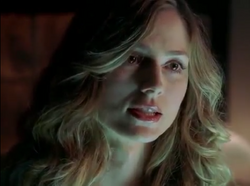 Angie's villainous reveal
Add a photo to this gallery
Retrieved from "https://femalevillains.fandom.com/wiki/Angie_Charles_(CSI:_NY)?oldid=142105"
Community content is available under CC-BY-SA unless otherwise noted.