Angie was a prominent member of the Nuke Cult, and Cain's lover. Like her lover and mentor, she is totally hooked on the nuke drug.

She appears to be Puerto Rican and has black pressed perm hair. Not much is known about her. She is sleek and beautiful. But she can be quite dangerous indeed.

She was with Cain at a Nuke manufacturing facility when it was raided by cyborg police officer RoboCop.  She and Cain were able to calmly escape the fiasco.

Later she helped ambush RoboCop at the old sludge plant the cult used as a base of operations and watched as fellow cult members disassembled the cyborg.

After Officer Duffy was discovered to have tipped off RoboCop to the sludge plant, Angie watched in horror as Cain had him eviscerated alive.

RoboCop later returned to the plant with fellow police officers.  As a result of this bust, Cain was apprehended and later died.  Angie was devastated by Cain's death, but continued to work with Hob in cult activities.

As Hob attempted to make a deal with Mayor Marvin Kuzak, the new cyborg officer RoboCop 2 attacked, killing everyone in sight.  However, as the cyborg had Cain's brain, it recognized Angie and the two briefly bonded.  However, RoboCain's mood changed suddenly, and Angie was snatched by the the face and head and viciously shaken, shattering her vertebrae and killing her. 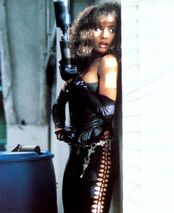 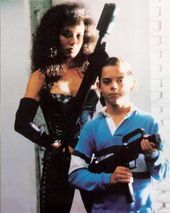 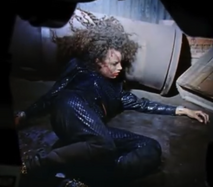 Add a photo to this gallery
Retrieved from "https://femalevillains.fandom.com/wiki/Angie_(Robocop_2)?oldid=207362"
Community content is available under CC-BY-SA unless otherwise noted.