Start a Wiki
watch 01:51
The Loop (TV)
Do you like this video?
Angeline (Natalie McFetridge) is an alien antagonist in the 2007 film Decoys 2: Alien Seduction. Angeline is first seen making out with a guy with dreadlocks. She is on top of him while he is laying on his back in the snow. The guy is using his video on the phone to send the moment to his buddies to prove that he is getting some action. Angeline takes off her top revealing a nice brasierre that barely contains her large breasts. She then takes off her top before raping him with her tentacles that came out of her stomach. We see the tentacles go inside the guys mouth and then the scene breaks away from the action.

Later we see Angeline at a dance with her Decoy sisters Delia (Michelle Molineux) and Jasmine (Lindsay Maxwell). A group of Sam Compton (Tyler Johnston), Stephanie Baxter (Kailin See), Nick Dean (Brad Goddard) and Henry Robbins (Reamonn Joshee) pick them out of a crowd, and the Decoy sisters all flee. Angeline tears off a door and throws it at them in an attempt to stall them.

The Decoys are chased to the hospital. Nick enters a dark room holding a flaming can for defense.  Angeline attempts to seduce him and even changes clothes in this attempt. However, Peter Brunson (Ryan Ash) shows up and reminds Nick that she is not human. Nick uses the flame to back Angeline up. She bumps into the electrical outlet and gets electrocuted. While she is being electrocuted, she changes into her alien self and eventually burns up into dust. 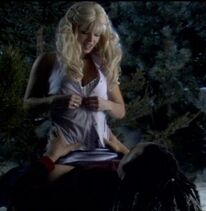 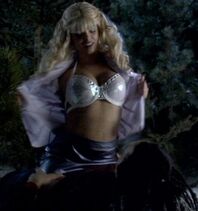 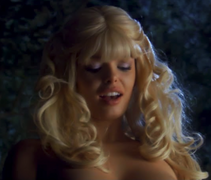 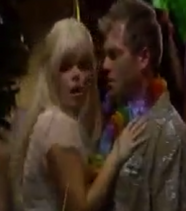 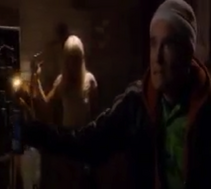 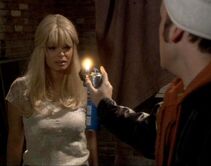 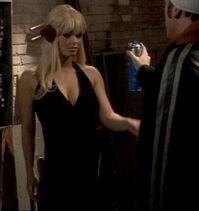 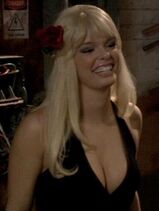 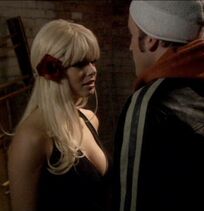 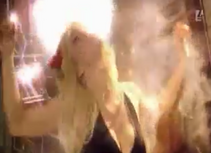 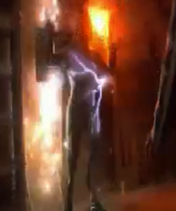 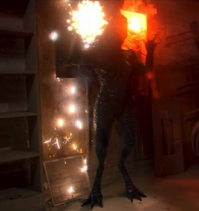 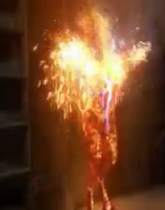 Add a photo to this gallery
Retrieved from "https://femalevillains.fandom.com/wiki/Angeline_(Decoys_2:_Alien_Seduction)?oldid=200743"
Community content is available under CC-BY-SA unless otherwise noted.