Start a Wiki
watch 01:51
The Loop (TV)
Do you like this video?
Angelina Love is a professional wrestler best known for competing in TNA, where she portrayed a villainess.

Angelina debuted in TNA in 2007 along with Velvet Sky, but both she and Velvet would become villains within months when they attacked Roxxi LaVeaux while giving her a makeover. After her heel turn, Angelina and Velvet officially referred to themselves as The Beautiful People. Angelina's first stint as a villainess would lead to her first two reigns as Knockouts Champion, but after her second reign ended, she and Sky ousted their group's newest member, Madison Rayne, from the faction. Angelina was out of TNA by late 2009 due to issues with her work visa, but she returned in 2010 and attacked her former BP members and their new cohort, Lacey Von Erich, ending her first stint as a heel Knockout.

Angelina and Velvet reunited as babyfaces until Winter arrived in October. After Velvet inadvertently caused Angelina and Winter to lose the Knockouts Tag Team Championship to Sarita and Rosita, Angelina was slowly turning heel against Velvet, while under the manipulative spell of Winter. Angelina turned heel when she attacked Velvet during a tag team match, doing so under Winter's orders. In her villainous role, the evil Angelina was originally portrayed as a "demon" for Winter; appearing dazed due to Winter giving her drinks that she spiked. She continuously feuded with Velvet as well as Mickie James in her role, but within months, Angelina was back to normal. However, Angelina continued her role as a villainous Knockout and remained aligned with Winter, which included helping Winter capture the Knockouts Championship. Her heel role ended when she was released by TNA in the summer of 2012.

Angelina returned to TNA on March 13, 2014 with the intent of reforming The Beautiful People with Velvet Sky, and the two did reunite a week later. She was turned down by Madison Rayne after Angelina acted pompous towards her, but she ran into Madison later in the evening and insisted that she's changed and that the BPs will be together as equals. However, when Madison's back was turned, Angelina viciously attacked her, turning Angelina into a villainess for the third time in TNA. A week later, Angelina ordered Velvet to choose a side; either her or Madison. During Angelina's match against Madison, Velvet showed her allegiance to Angelina by attacking Madison outside the ring, leading to Angelina defeating her. In her latest heel role, Angelina has feuded with not only Madison (which led to her sixth Knockouts Championship at Sacrifice) but with Brittany and Gail Kim. Angelina and Velvet also targeted Taryn Terrell when she returned from her maternity leave.

The BPs split up in 2015 when Velvet was fired due to the Feast or Fired stipulation, leaving Angelina as solo villainess once again. Angelina feuded with Brooke Tessmacher for weeks until she was confronted by the returning Velvet Sky in May. The former partners feuded for a few months, leading to Angelina losing to Velvet in a grudge match. The feud ended when Angelina and Velvet realigned with Madison Rayne to form the Beautiful People once again as babyfaces. Angelina departed from TNA in March 2016.

Angelina again returned to TNA in early 2017, first appearing backstage with Alisha in a segment with their respective husbands, Davey Richards and Eddie Edwards. Both women were in the front row as Eddie competed in against Lashley in a rematch for the World Heavyweight Championship, with the stipulation that Eddie would be out of the title picture with a loss. Davey appeared at ringside apparently in his partner's corner, only to betray Eddie and prevent him from regaining the championship. Following Davey's betrayal, Angelina attacked Alisha, becoming a TNA villainess once again. The villainous couple's actions led to Eddie losing to Lashley, and after the match ended, the evil Angelina dragged Alisha into the ring and forced her to watch Davey beat down Eddie. Angelina and Davey embraced each other after their assault. 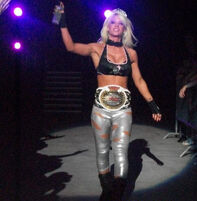 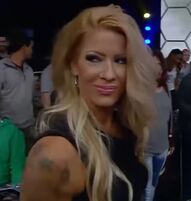 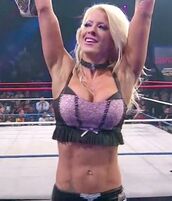 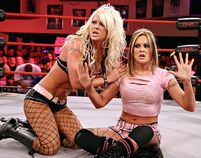 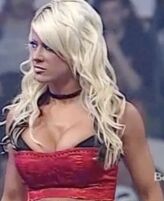 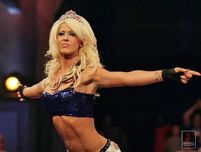 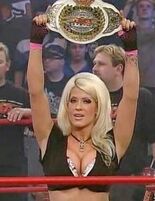 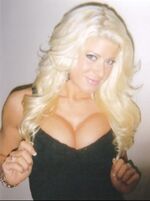 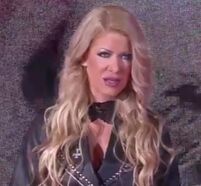 Add a photo to this gallery
Retrieved from "https://femalevillains.fandom.com/wiki/Angelina_Love_(TNA)?oldid=191632"
Community content is available under CC-BY-SA unless otherwise noted.