Start a Wiki
watch 01:51
The Loop (TV)
Do you like this video?
Angelica Sin is a vampire woman who appears in the 2003 episode  I'm Gonna Get You, Fat Sucka. for the TV series Duck Dodgers. She was voiced by Grey Griffin.

Angelica is one of the Sin sisters, and one of the daughters of Count Muerte, who is also known as Count Death.  Her other sisters are Hella and Ramona .  They suck fat from people.

After first allowing the pig to go, she sucks Duck Dodgers' fat.  However he ends up being fine. She speaks with a Romanian accent. 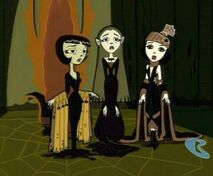 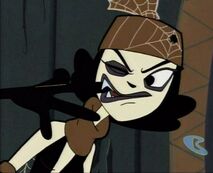 Add a photo to this gallery
Retrieved from "https://femalevillains.fandom.com/wiki/Angelica_Sin_(Duck_Dodgers)?oldid=188420"
Community content is available under CC-BY-SA unless otherwise noted.