Start a Wiki
watch 01:50
The Loop (TV)
Do you like this video?
Angela Grant alias "The Fox " is a villainess who appears in the comic strip story Lady Penelope vs the Fox in the Lady Penelope annual (UK. 1967).

Angela Grant, who is secretly a mysterious criminal known as "The Fox", uses her cover as a top fashion model to make herself rich by carrying out robberies. She steals the formula for a revolutionary new substance for making clothes (and kidnaps the inventor). Lady Penelope manages to track down Grant and her gang to their hideout. Though initially taken prisoner by Grant, who intends killing them, Penny and her trusty butler, Parker, break free and take on the villains. Angela Grant is disarmed of her gun by Penny, who foils the evil model's subsequent attacks - Grant throws a hypodermic at Penny and tries to smash the heroine with a chair - karate chopping the villainess and capturing her.

Note - The character Lady Penelope  is Penelope Creighton - Ward, the aristocratic London agent for the "International Rescue" organization in the UK TV puppet series Thunderbirds (1965 - 66).Thunderbirds producer Gerry Anderson marketed his creations in various other forms during the 1960s, including new British weekly comics called TV 21 and Lady Penelope (the latter aimed at girls). Hard back annual versions of the comics were produced in the late 1960s. Many of the Lady Penelope strip stories had no connection with International Rescue - they were independent investigations by Penny and Parker. 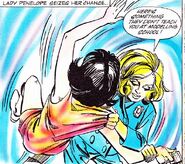 The Fox - defeated
Add a photo to this gallery
Retrieved from "https://femalevillains.fandom.com/wiki/Angela_Grant/The_Fox_(Lady_Penelope)?oldid=160457"
Community content is available under CC-BY-SA unless otherwise noted.