Start a Wiki
watch 01:51
The Loop (TV)
Do you like this video?
Angela Gordon (Lenore Aubert; 1918-1993) is a villainess from 1949's Abbott and Costello Meet the Killer, Boris Karloff. She is one of the former clients of the film's murder victim, criminal attorney Amos Strickland.

After Strickland is found murdered, Angela expressed sorrow and appeared to be in tears over Strickland's death, as she used bellboy Freddie Phillips' (Lou Costello) handkerchief to wipe her eyes. However, Angela later displays a cold demeanor when she informed Swami Talpur, and later Mrs. Hargreave and Mrs. Grimsby (three more former clients) of Strickland's death, revealing that her sorrow was a front. As the film progressed, Angela's heel persona fully surfaced, as she was revealed to be working with the six other former clients to set up Freddie--who was already suspected--to take the fall for Strickland's murder.

The film revealed that Strickland was planning on retiring and writing a memoir, which could end up revealing his clients' secrets. In the case of Angela, she was revealed as a murderess, as she poisoned her previous husband with a champagne cocktail. The scene commenced following the murders of Mike Relia (one of the clients) and Strickland's secretary Gregory Milford, and later on, the evil Angela attempted to seduce Freddie into signing a confession that implicated himself in all three murders. The villainess later attempted to give Freddie a champagne cocktail, but it was at that moment that house detective--and Freddie's cousin--Casey Edwards (Bud Abbott) entered with Inspector Wellman and Sergeant Stone and saved Freddie, after Casey was informed about Angela's murderous past.

As it turned out, the champagne wasn't poisoned, as Angela herself informed her co-conspirators that her plan was to merely get Freddie drunk. She agreed to the Swami's plan to hypnotize Freddie into committing suicide, though Freddie's incompetence ended up saving him. Though Angela did participate in the attempt to set up Freddie, it turned out that neither she nor any of the other clients killed Strickland, who was revealed to have made up the story of retiring to draw out the clients. The killer was revealed to be hotel manager Milton, who was taken down and arrested, though Angela's fate wasn't revealed in the film. 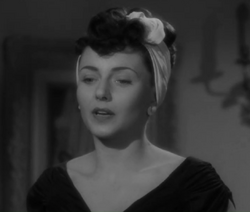 Add a photo to this gallery
Retrieved from "https://femalevillains.fandom.com/wiki/Angela_Gordon_(Abbott_and_Costello_Meet_the_Killer,_Boris_Karloff)?oldid=170187"
Community content is available under CC-BY-SA unless otherwise noted.