Night of the Demons

Angela Franklin was once considered to be a gifted student.  However, in her senior year, she becamed a loud-mouthed goth, wearing nothing but black and gaining the reputation of a witch from her classmates.

On Halloween Night, Angela and her friend Suzanne (Linnea Quigley) held a Halloween party at Hull House, a funeral parlour that had been abandoned for years due to past murders.  They invited seven classmates, and one that was not invited showed up.  During the party, Angela decided to have a past life seance.  Unfortunately, one of the teenagers interrupts the seance, which breaks the process.

Through this, a demon awakes in the crematorium of the house.  It makes its way up into the living room and possessess Suzanne.  After Suzanne kissed Angela, the demon began to possess her.  She developed incredible strength, teleportation, telekinesis, and immortality.

Night of the Demons 2

In the second film, "Night of the Demons 2", it was determined that her body was not found.  The police therefore ruled her as a suspect in the murders.  For six years, Hull House remained empty.  Police kept a close watch on the house and continued to investigate.  People claimed to sight a ghostly figure of a woman in a black dress wandering around Hull House at midnight.  In 1993, the police culminated the investigation and stoppped watching Hull House.  On Halloween Night of 1993, Angela's parents received a greeting card with dried blood all over it, bearing Angela's signature.  That night, both of her parents committed suicide.

In 1994, Angela set her eyes on her sister, Melissa Franklin (Merle Kennedy) and wanted to sacrifice her to the devil.  Things escalated when Shirley Finnerty (Zoe Trilling) decided to plan a event at Hull House, in order to prank Melissa.

Perry (Robert Jayne) held a demon summoning ritual inside the sanctuary, resulting in Angela assaulting him.  Later, Angela assaulted and physically abused Z-Boy (Darin Heames).  She teleported to St. Rita's Academy through her lipstick, brought by Bibi (Cristi Harris) and then passed on to Shirley, who, while applying it in the lavatory, got attacked by Angela.  From there she began seducing teenagers in the Halloween party including Johnny, beheading Kurt and then escorting Melissa to the Hull House on the promise of a reunion.

Angela caused a havoc inside the Hull House, but stopped from slaying Melissa on the altar.  Instead, Angela beheaded Sister Gloria (Jennifer Rhodes).  However, Gloria's faith allowed her to restore her head.  At the end, Melissa stabbed Angela and gave birth to the Lamia form of Angela, which was later ended by Johnny with the help of sunlight.

Night of the Demons III

This was a straight to video film.  In the film, a group of delinquents accidentally shoot a police officer.  To avoid arrest, they hide out in Hull House, unaware that it is haunted by Angela.  One by one they all are eliminated, including Lois (Tara Slone) who has her snake puppet turned into a real snake, which bites her head off. 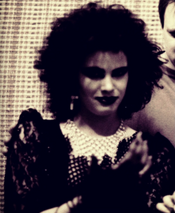 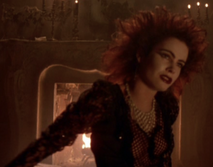 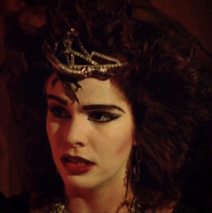 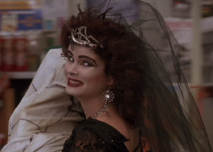 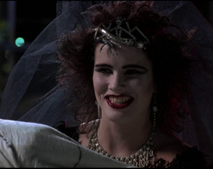 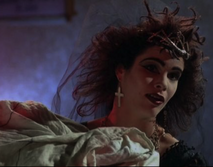 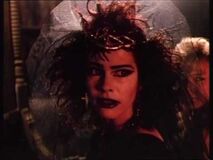 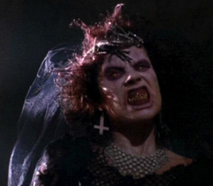 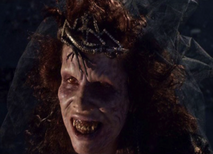 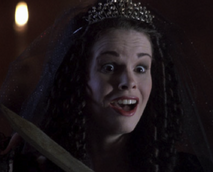 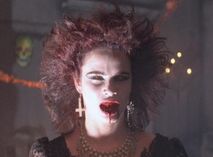 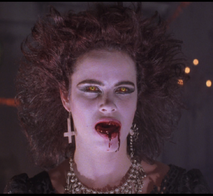 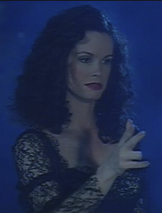 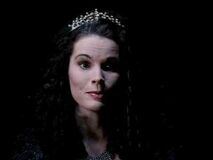 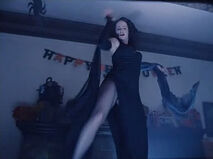 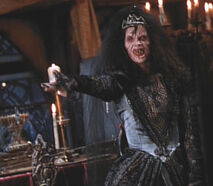 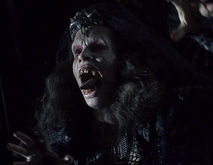 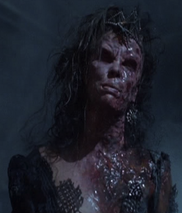 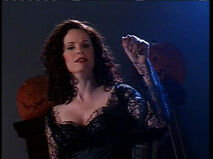 Add a photo to this gallery
Retrieved from "https://femalevillains.fandom.com/wiki/Angela_Franklin_(Night_of_the_Demons)?oldid=174639"
Community content is available under CC-BY-SA unless otherwise noted.