When all of the local mob bosses become frustrated by detective Nick Tresy constantly thwarting their plans, one of them enlists in the help of the greatest assassin known to him. When one of the mob members scoffs at the fact that the revered killer is a woman, Andrea puts all doubts to rest by killing the man instantly with a throwing dagger. Having proved herself, she states that she will kill Tresy for the price of $100,000 and they should start ordering his coffin now.

In Andrea's first attempt, she approaches Nick as he is exiting a toy story after buying a birthday present for his niece. Pretending to be an employee, she hands him a wrapped desert, explaining that it is a complimentary gift for all purchases being made at this time. Nick accepts the gift, not knowing that it in fact contains a bomb. Shortly after having reached his sister's home and having given his niece her gift, Nick realizes that he left the desert out in the car. Fortunately for him, before he reaches his vehicle, the bomb goes off.

Laying low in a hotel room, Andrea is furious to discover that her plan has failed. Wanting to relieve her frustration, she calls the front desk and demands that a man be sent up to have sex with her. An employee named Nicolas is dispatched to the room, however, when he ejaculates prematurely, a now- angrier Andrea slices off his penis with a knife before then severing his jugular.

Andrea tries again by poisoning Nick's lunch at a restaurant in the city. Her bad luck strikes again, however, when Nick's famished friend Johnny is given the food instead. From here, the villainess breaks into Nick's home and rigs it with explosives, believing that the detective's death will be a sure thing this time. But Nick, now realizing that someone is gunning for his life, decides to stay at his office where he keeps a spare cot. When he sends his assistant, Philip, to his house to retrieve his razor and pajamas, the unfortunate man is killed in Nick's stead.

Not wanting anyone else to get hurt, Nick requests that it be reported that he had indeed died in the explosion, so that he can continue investigating in secret. The detective eventually concludes that the woman from the toy store and the restaurant was also the one who killed the custodian at the hotel. A little more sleuthing reveals that Andrea is twenty-two years old, has had numerous aliases, and despite being linked to at least twelve murders on behalf of the New York mob, her gentle and harmless appearance has kept her out of prison.

After finally finding some sexual satisfaction from an attractive stranger, Andrea is confronted and captured by the authorities. After Nick surprises her with the fact that he is still alive, the villainess is sentenced and later put to death via the electric chair. 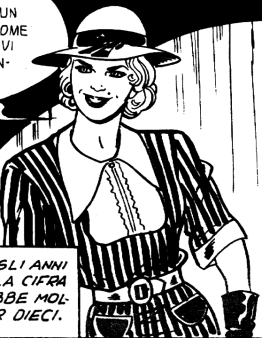 Retrieved from "https://femalevillains.fandom.com/wiki/Andrea_Smith_(Nick_Tresy)?oldid=198113"
Community content is available under CC-BY-SA unless otherwise noted.