Start a Wiki
watch 01:51
The Loop (TV)
Do you like this video?
Andrea Brown (Jessica Tuck) is the hidden main villainess from "Love is a Battlefield", episode 1.06 of Stalker (airdate November 5, 2014).

Andrea is the chair of an arts foundation, and in the opening scenes, she is shown as a victim of stalking and harassment when her home is tagged with words demonizing her. Andrea named her ex-husband, Kenneth, as the culprit behind the attacks, stating that she has a restraining order against him. Later on, Andrea is attacked in a parking garage by a masked man, who also appeared to attack her at her home, as revealed in a video that also included Andrea and Kenneth making out. At the episode's climax, Melissa (Kenneth's girlfriend) visited Andrea and apologized for breaking up her marriage, doing so after handing Beth evidence that suggested that Kenneth killed Andrea's dog: Kenneth's shirt covered in blood. Andrea accepted Melissa's apology and let her inside, but subsequently, Andrea turned heel and attacked Melissa, striking her left cheek with a handgun.

It was revealed that Andrea was the true mastermind behind everything that occurred. She was left furious and distraught over Kenneth's affair with Melissa, leaving Andrea to concoct a twisted plan to bring Kenneth back to her. Andrea paid her lover, artist Damon Edwards, to vandalize her home and to assault her. She even killed her own dog, Roxie, and drenched Kenneth's shirt with her blood, doing so after making out with Kenneth and sending the video. Andrea's actions resulted in Kenneth getting arrested, and the final part of her plan was to kill Melissa.

Before doing so, the evil Andrea set up Melissa as a crazed woman who attacked her, going as far as to strike herself on her head with a picture frame and tossing everything around to make her story credible, while also stating that she had to kill Melissa in self-defense. At that moment, Jack and Beth crashed in and held Andrea at gunpoint, before the villainess had the chance to kill Melissa. Jack managed to talk Andrea down before wrestling the gun away from her, saving Melissa and arresting Andrea. 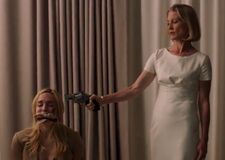 Andrea threatening to kill Melissa
Add a photo to this gallery
Retrieved from "https://femalevillains.fandom.com/wiki/Andrea_Brown_(Stalker)?oldid=154549"
Community content is available under CC-BY-SA unless otherwise noted.