Start a Wiki
watch 01:48
The Loop (TV)
Do you like this video?
Andrea (Melinda Mullins) appears in the 1993 comedy movie Dennis The Menace

Andrea is a stuck up and snobby businesswoman, who is mean and nasty to her colleagues. She takes delight in putting them down in front of others.

At the end of the movie while the credits are rolling, Andrea goes to the print room to do some photocopying. Dennis Mitchell (Mason Gamble), who is the young mischievous son of Alice Mitchell (Lea Thompson), who Andrea has been particularly nasty to, is sitting in the room. When Alice notices that Andrea and Dennis are in the room together, she decides to leave him there, knowing that Andrea is in for a rude awakening and comeuppance.

Dennis asks Andrea if he can start the machine, but she sarcastically says “no you can't push the button, because you don't know which button to push”. As Andrea is leaning over the photocopier Dennis rushes up to the machine and presses a button which starts the machine. Part of Andrea’s top gets caught in the machine and she gets pulled down on top of it. The machine starts to photocopy while Andrea’s face is planted against the glass scanner-bed. Andrea tries to pull herself off the machine, but is unable to do so. As she struggles her face squishes against the glass. The photocopier starts to churn out black and white pictures of her agonized facial expressions.

Dennis rushes out of the room leaving Andrea struggling on top of the photocopier. She manages to pull herself free, but the force at which she does this sends her flying backwards, where she loses her balance and crashes to the floor, leaving her feet up in the air. 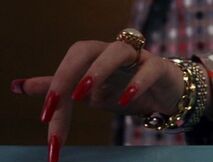 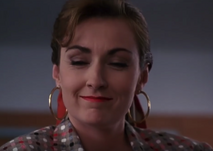 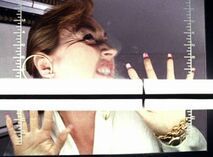 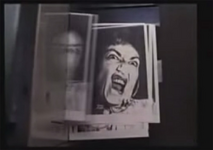 Add a photo to this gallery
Retrieved from "https://femalevillains.fandom.com/wiki/Andrea_(Dennis_The_Menace)?oldid=200207"
Community content is available under CC-BY-SA unless otherwise noted.