Amy Wainwright (Amy Brennaman) is the main villainess from "A Christmas Secret," episode 9.09 of Murder, She Wrote (airdate December 13, 1992). She was the co-worker and lover of Floyd Bigelow, who worked at a hardware store in Cabot Cove.

As revealed later on, Floyd was embezzling money, and his secret was discovered by Wanda Andrews. Wanda made a blackmail tape for him, but due to her color blindness, she put it in Charlie McCumber's car by mistake. When Floyd failed to show to up at the place where she arranged to meet him, Wanda had to wait until he returned from Portland. She called the hardware store, but unbeknownst to her, Amy had overheard the conversation.

In order to protect Floyd from being exposed as an embezzler, Amy planned to kill Wanda, beginning with taking a gun from the hardware store. Later that evening, the evil Amy donned a Santa Claus costume and waited for Wanda to arrive in the women's locker room, where she shot Wanda and left with the evidence. The villainess didn't know if Wanda had survived, but she was still able to conceal Floyd's role as an embezzler.

Amy's reveal actually began when she listened in on Floyd's phone call with Jessica Fletcher, and it was completed when Amy met Floyd at the same locker room, as he was looking for the evidence. She revealed everything she did for him, but despite this, Floyd held her at gunpoint before he was later stopped by Sheriff Metzger, who arrlved with Jessica and other officers. It was Jessica who revealed that Wanda had survived the shot, and after this, Amy confessed again, while professing her love for Floyd. Both Amy and Floyd were arrested; the latter for Wanda's attempted murder. Amy swears that it was never her intention to frame Charlie. 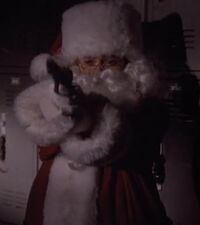 Amy in her Santa disguise 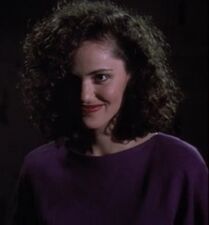 Amy's evil smile during her reveal
Add a photo to this gallery
Retrieved from "https://femalevillains.fandom.com/wiki/Amy_Wainwright_(Murder,_She_Wrote)?oldid=139195"
Community content is available under CC-BY-SA unless otherwise noted.