Start a Wiki
watch 14:21
The Loop (TV)
Do you like this video?
Amy Turner (Allie MacDonald) is the main villainess of the 2018 Lifetime film Psycho Prom Queen (alternately titled Mean Queen; airdate November 4, 2018).

Not much is revealed about Amy's backstory—only that her parents are divorced and that she has been known to engage in sociopathic behavior. She revealed that she lured a girl who (she claimed) bullied her to her secret hideout in a wooded area under the pretense of giving her Halloween candy, only to commit some harmful act towards her (which wasn't clearly disclosed).

Amy became obsessed with becoming prom queen, but her dreams were threatened by a failing math grade. Her teacher, Joanne Harvey, refused to give in to Amy's demands to cut her slack, leading to the deranged psychopath abducting Joanne and tying her up in her hideout. After that, Joanne was believed to have committed suicide; a rumor most likely started by Amy to cover up her actions. The film's events introduced Julie Taylor (the film's main protagonist), who was a friend of Joanne's, as the school's new math teacher, and she noticed Amy befriending Miya—Julie's daughter and a new student at the school.

Julie began to notice Amy's mean girl personality, and they began clashing when it became clear that the former was going to be as strict with her as Joanne was. Julie then learned more about Amy's evil demeanor when she found out how she ruined the marriage of one teacher and even threatened another teacher, Mr. Peters, with a false claim that he fondled her if he didn't allow her to take a make-up test. Regarding the test, Amy ordered Joanne to take it for her, with the scene officially revealing Joanne's fate and whereabouts. The villainess continued manipulating Miya and even lashed out at her mother Elaine for not providing enough for her—espite the fact that she was working 12 hour shifts.

Amy coerced her friends into ousting Miya from their clique because of how "mean" Julie was to her, and late one night, Julie caught Amy heading to the hideout where she kept Joanne, leading to a confrontation. At that moment, the evil Amy suddenly started punching herself, doing so in an attempt to set up Julie as a crazed villainess who stalked and attacked her. Her ruse worked, and Julie lost her job while Amy passed and going to prom.

The film's climax had Amy approaching Miya, doing so to look at the votes for prom queen. When she found out she didn't win, Amy berated Miya and then changed the vote, leading to a confrontation that ended with Amy breaking Miya's arm and smashing her head on a table before locking her in a storage room. Meanwhile, Julie's conversation with Elaine led both of them to the hideout, where they found Joanne. After Joanne revealed everything about Amy's scheme, Julie went to the school and confronted the villainess, who was announced as prom queen—with her boyfriend Dylan as prom king. After head-butting Julie, Amy was giving her speech when Elaine suddenly arrived with police officers, who arrested Amy. Realizing what was happening, the psychotic teenager lashed out at the officers and claimed that she was prom queen, stating that she deserved it and that the rest of the students (including Dylan) were "losers." Amy was slapped in her face mid-rant by Joanne, after which she broke down in a fit of crying and crazed laughter as she was taken into custody to be sent to prison, her goals shattered forever. 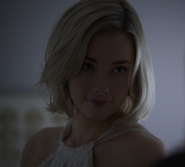 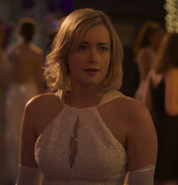 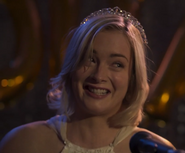 Add a photo to this gallery
Retrieved from "https://femalevillains.fandom.com/wiki/Amy_Turner_(Psycho_Prom_Queen)?oldid=199217"
Community content is available under CC-BY-SA unless otherwise noted.