Start a Wiki
watch 01:48
The Loop (TV)
Do you like this video?
Amy Cohen (Brittany Allen) is the villainess of "Young Guns", episode 5.08 of Republic of Doyle (airdate November 27, 2013). She was a former PHD student at Memorial University, having written a thesis on producing firearm schematics. Prior to the episode, however, Amy made a deal with arms dealer Ben Novak to sell him firearm schematics she planned to make on a 3-D printer in Memorial's engineering lab.

To gain access to the lab, Amy conspired with Grant Pritchard to take over Memorial's cashier's office, which was located above the engineering lab. Armed with a pistol and rifle respectively, Amy and Grant took the cashier's office hostage after jamming the phone and Internet signals, with Amy later using a voice modulator to call Sergeant Leslie Bennett to give demands, ordering that she and Grant be given a helicopter to make their getaway in.

Jake Doyle (who had been at the university to investigate the malfunctioning security cameras by his new girlfriend, Memorial's head of security Eva Laurant) was among the hostages, and attempted to subdue the robbers by setting Grant on fire using chemicals. But as Jake held Grant at gunpoint with his rifle, the evil Amy held a security guard at gunpoint and forced Jake to surrender, later sending Grant to another room to kill Jake, threatening to kill Grant when he was reluctant to do so and blasted Amy for "falling apart". But ultimately, Jake (with help from Eva and his father Malachy, who had been hiding) managed to subdue Grant, later taking his disguise to trick Amy into thinking he was Grant and allow him to help the hostages escape.

Jake's plan hit a snag, however, when Eva panicked and attempted to escape, only to be caught and taken as a hostage by Amy. Having broken into the engineering lab and used the 3-D printer to make a gun to sell to Novak, Amy fled the university with Jake and Eva in a police car, having planted a bomb on the 3-D printer to cover up the evidence (with the printer being destroyed by the bomb's explosion). As the three drove away, the evil Amy ordered Jake to kill Eva, with Jake's refusal causing Amy to realize Jake had been impersonating Grant. Amy fled the police cruiser after opening fire on Jake and stole a passerby's car, going to the airport to meet Novak to sell him the gun and schematics after disguising herself as a custodian. Jake arrived and intervened in the meeting, with Amy attempting to shoot a flight attendant with the printed gun before being disarmed by Jake. After boasting to Jake that Novak would be in touch with her for her services, the police arrived and placed Amy under arrest, with Grant later taking a deal in exchange for testifying against her and Novak. 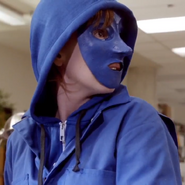 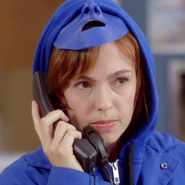 Amy after taking Eva as a hostage 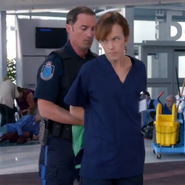 Amy's arrest
Add a photo to this gallery
Retrieved from "https://femalevillains.fandom.com/wiki/Amy_Cohen_(Republic_of_Doyle)?oldid=187900"
Community content is available under CC-BY-SA unless otherwise noted.