Start a Wiki
watch 01:48
The Loop (TV)
Do you like this video?
Amy (Amanda Brugel) is a villainess from Warehouse 13, appearing in episode 4.13, "The Big Snag" (airdate May 13, 2013). She is a saleswoman at a car dealership investigated by Artie, Claudia, and Steve; due to its connection to certain cars that have been stolen recently. Her boss claimed that the thief contacts him anonymously and gets him any car that he wants.

A stakeout at a parking garage ends with the thief actually driving the car through the wall, so an artifact has to be involved. The thief drives to another garage, unaware that Claudia was hiding in the trunk. Claudia attempted to take the thief's gloves after learning that they are the artifact, but at that moment, Amy turned heel and attacked Claudia; revealing herself as the thief while knocking a gun out of Claudia's possession with a tire iron.

During their physical confrontation, the evil Amy ranted that cars are to be treasured and not to be locked up in garages, and she manages to get away with one of the gloves while Artie takes the other one. Amy's escape is eventually thwarted by Artie in a high-speed confrontation. 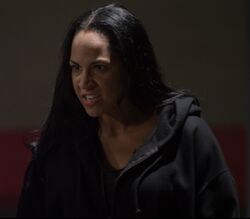 Amy's sinister sneer after her reveal 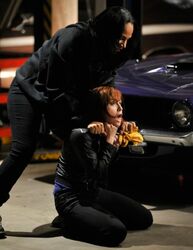 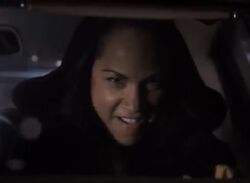 Amy shown in a confrontation with Artie
Add a photo to this gallery
Retrieved from "https://femalevillains.fandom.com/wiki/Amy_(Warehouse_13)?oldid=199369"
Community content is available under CC-BY-SA unless otherwise noted.