Amy (Mircea Monroe) is a former government spy and former member of the elite CAT Squad who first appeared in Chuck in "Chuck Versus the Cat Squad".

Four years prior to the group falling apart due to suspicions of a traitor, Amy was a member of the elite government spy team known as CAT Squad, which consisted of Amy, Sarah Walker, Carina Miller and Zondra.

The CAT Squad was shown to be a very successful spy team known for taking down many enemies of the US government however they were always unable to take down Augusto Gaez, the arch nemesis of the group.

The squad started falling a part after a failed mission. They found a bug on one Zondra's boots and started to suspect that a member of the squad was a traitor. Sarah was convinced that it was Zondra when she found a transmitter in her boots. Zondra on the other hand, believes that it was Sarah who planted it there. The team split up and went their separate ways, leading Sarah to eventually be assigned to Team Bartowski. However, it was secretly Amy who planted it...

Amy is seemingly the bubbly party girl of the group but secretly hates her role. She is actually revealed to be a vicious and sadistic young woman, as shown when she brutally knocks Sarah and Zondra unconscious with a stick. She also can fight very well, albeit in an underhanded way, as shown when she kicks Chuck in the balls. However, this is unable to help her when her foot is tied up after a failed escape attempt, along with her boss Augusto. 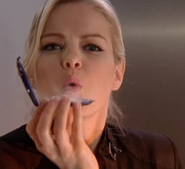 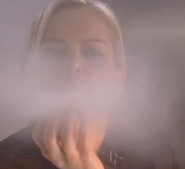 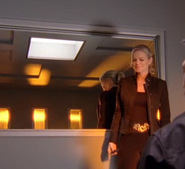 Add a photo to this gallery
Retrieved from "https://femalevillains.fandom.com/wiki/Amy_(Chuck)?oldid=191384"
Community content is available under CC-BY-SA unless otherwise noted.