Start a Wiki
watch 01:51
The Loop (TV)
Do you like this video?
Amelia von Butch is a villainess in the 2005 direct-to-video "Scooby-Doo in Where's My Mummy?".  Her voice was played by Christine Baranski.

Dr. Amelia von Butch is an archaeologist and world-class treasure hunter.  She has blonde hair tied in a ponytail, and wears black.

Amelia cared little for the treasures she sought after, as long as they made her money.  She was willing to blast her way through anything, no matter what the historic value, as long as she got what she came for.

Amelia encountered Mystery Inc. when she decided to go after the crown of Cleopatra, hidden within the Sphinx.  Thus her crew ran right into Velma Dinkley's ghost of Cleopatra plan to protect the treasure.  After avoiding the "army of the undead" and watching her henchmen seemingly be turned to stone, she finally reached the crown.

In grabbing it, however, she set off a trap, flooding the tunnels.  Amelia made it out of the Sphinx only to be caught in a carpet and have the crown snatched by Triple A's hawk. 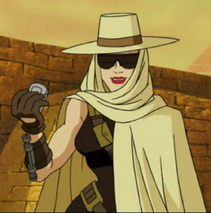 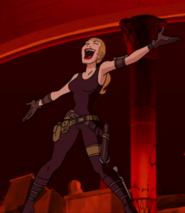 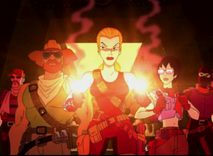 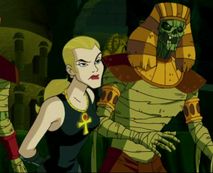 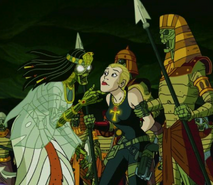 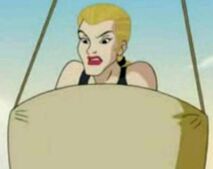 Add a photo to this gallery
Retrieved from "https://femalevillains.fandom.com/wiki/Amelia_von_Butch_(Scooby-Doo_in_Where%27s_My_Mummy%3F)?oldid=155582"
Community content is available under CC-BY-SA unless otherwise noted.