Ambrosia (Nichole M. Hiltz) is a minor villainess in the 2002 psychological horror film "May".

In the film, an awkward, lonely yioung woman named May Dove Canady (Angela Bettis) who has suffered a rough childhood due to a lazy eye.  She struggles socially to make friends.  Her optometrist fixes her lazy eye and becomes friends with a mechanic named Adam Stubbs (Jeremy Sisto), who she is attracted to him for his hands.  She then befriends Polly (Anna Faris) who she is attracted to because of her beautiful neck.  May and Polly begin a lesbian affair after she has a falling out with Adam.  However, when she visits Polly and finds her with another girl named Ambrosia.

Ambrosia is the beautiful lesbian lover of Polly, who is stuck up and jealous of May.  May is the anti-villain in the film, who finds flaws in the characteristics of her friends, lovers and rivals.  Ambrosia is definately a rival of hers, and she doesn't want anyone coming between her and Polly.  Ambrosia uses her beauty to belittle May, and flaunts her sexuality to claim her dominance over her.

On Halloween night, May dresses in a homemade costume resembling Suzie her doll and goes to Polly's house.  She slits Polly's throat.  When Ambrosia arrives, she is dressed in a red and white stripped miniskirt with white go-go boots and a white crop top.  Her blonde hair is tied up in pigtails.  May admires her sexy legs, and the following interraction takes place:

Ambrosia:  Polly, hurry up in there!  I've been drinking vodka all night and I have to piss like a racehorse!

May:  (changes the subject) You have really beautiful legs.

Ambrosia:  I thought they were gams?

May:  Gams, stems, wheels, whatever.  Give us a little spin, doll.

May:  Turn around for me.

Ambrosia:  You are so fu*cking weird.  I don't know what Polly sees in you.

May:  Polly doesn't see anything.  Turn around, Miss Grable.

Ambrosia:  Okay, doll (she does a sexy spin)...How was that?

May:  Beautiful...(May stabs Ambrosia in the temple with a scalpel, killing her.

After stabbing her in the temples, Ambrosia drops the carton of milk she was drinking and blood mixes with the milk on the floor.  This is the end of the lovely Ambrosia.

Next, May kills Adam and his new girlfriend Hoop (Nora Zehetner) who she admires for her earrings.  She then returns home to design her "new friend" Amy, a life-sized patchwork doll made from Blank's arms, Polly's neck, Adam's hands, Ambrosia's legs, and Hoop's ears.  She uses her cat Lupe's fur for the hair.  The head and torso are stuffed fabric stiched together.  May realizes that Amy has no eyes and cannot see her, so she gouges out her lazy eye, fatally injuring herself.  Crying in pain and bleeding, she puts her eye on Amy's head and begs the doll to look at her.  She collapses dead on the bed beside the doll and caresses it.  Her creation comes to life and brushes her face affectionately with Adam's hands. 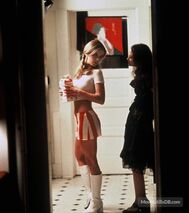 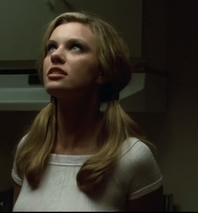 Add a photo to this gallery
Retrieved from "https://femalevillains.fandom.com/wiki/Ambrosia_(May)?oldid=204853"
Community content is available under CC-BY-SA unless otherwise noted.