Start a Wiki
watch 01:51
The Loop (TV)
Do you like this video?
Amber and Crystal Bailey (colloqiually refered to as "The Twins") are the 25 year old twin sister co-hosts of Tyrone King, the host of the extremely brutal and controversial game show called Terror Is Reality, in the game Dead Rising 2. This game show focuses on killing zombies in unethical ways, causing protests from zombie rights activists.

The two would appear as "psychopaths" later in the game, where Chuck Greene is forced to fight them for attacking reporter Rebecca Chang. The player is only required to defeat one of the twin sisters, either Amber or Crystal. Either way, the other would rush to her slain twin and stab herself, claiming she cannot live without her "other half." 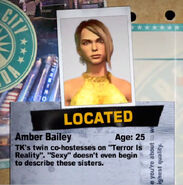 Profile
Add a photo to this gallery
Retrieved from "https://femalevillains.fandom.com/wiki/Amber_and_Crystal_Bailey_(Dead_Rising_2)?oldid=138592"
Community content is available under CC-BY-SA unless otherwise noted.