Amber (Jenna Fischer) is the villainess of "Anger Management", the Season 3 premiere of Dan Vs. (airdate November 17, 2012). She was the head counselour of an anger management center, which series protagonists Dan and his friend Chris were forced to attend after the latter tried to destroy the Earth to get revenge on a family of squirrels.

Amber initially came off as a compassionate and optimistic woman, instantly putting her at odds with Dan as he resisted her teachings. Amber eventually became angry at Dan after his influence caused the rest of Amber's students to destroy her car when the alarm went off, giving him and Chris clean-up duty around the school as punishment.

It was then that Dan took notice of Amber's intense rage against littering, as she became irate when a passing driver threw a crumpled up paper that hit her in the head. Dan later went to talk to Amber as she attempted to use tea and  a stress ball to calm herself, with Amber admitting that her methods for controlling her stress were ineffective. As a result, Dan and Amber formed a rapport and made plans to track down the littering driver and get revenge.

After using the driver's license plate number to track him down, Dan and Amber (donned in black clothing and ski masks) took their revenge by filling the man's car with garbage, with Amber additionally taunting the man and throwing a trash can at him when he came out and bemoaned the damage to his car. Later on, as Dan and Amber stopped at a restaurant, Amber expressed glee at their revenge plot and began making plans to get revenge on a high school bully of hers, shocking Dan with the revelation that they were only "revenge buddies" (having developed an unrequited attraction towards Amber). In response to Dan's attempt to back out of her plans, the evil Amber reminded Dan that he needed a certifcation of completion to avoid prison, essentially blackmailing Dan into remaining her accomplice.

That Saturday, Dan went with Amber to take revenge on her bully Emily, with the plot consisting of the duo setting a paint bomb off in the chapel wehre Emily was in the midst of getting married. Afterwards, Amber began making future plans to get revenge on her sister, responding to Dan's reminder that he graduated from her class in three days by revealing her intentions of extending Dan's counselling for however long she needed him. In the episode's climax, as Dan began taking advantage of the anger management teachings from Amber's class, Chris (who Amber had told repressed his anger too much) decided to channel his anger by littering around the school. An enraged and psychotic Amber responded by chasing Chris with a chainsaw, promising to murder Chris. The exchange was witnessed by Chris' wife Elise and the judge for Dan's trial, with Dan and the rest of Amber's pupils cornering Amber and encouraging her not to let her anger win. Amber surrendered and was led away by her students and the judge announced that Dan and Chris were free from the anger management class, though Amber's ultimate fate was left unknown. 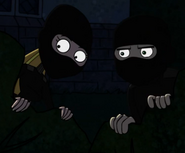 Amber in her villainous disguise alongside Dan 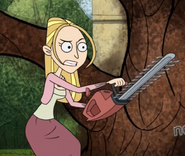 Amber wielding a chainsaw
Add a photo to this gallery
Retrieved from "https://femalevillains.fandom.com/wiki/Amber_(Dan_Vs.)?oldid=174936"
Community content is available under CC-BY-SA unless otherwise noted.