The Female Villains Wiki
Register
Don't have an account?
Sign In
Advertisement
in: 1970s, Bare-Handed, Bare Stomach,
and 18 more

The Amazons are one group of enemies of the protagonists in the 1979 sci-fi movie "Starcrash".

Under the leadership of their Queen Corelia (Nadia Cassin), they attempt to obstruct the protagonists on their quest.  The Amazons are dressed in leather miniskirts and low cut tops with one shoulder strap.  They have boots and most of them carry spears.  A majority of the Amazons are blonde.

When two of the protagonists, Stella Star (Caroline Munro) and her robot companion Elie (Judd Hamilton), land on a planet, they are greeted by a group of unarmed Amazons.  The Amazons proceed to take the two to see their leader. However, their peaceful demeanor is a ruse; once within their lair, the Amazons spring their trap, apparently destroying Elie with a surprise laser blast.

Once awakened to the danger, though, Stella proves harder to handle for the Amazons, as she makes short work of her five would-be captors. In the ensuing melee, Stella incapacitates and/or kills them all (their battle appears to be on a narrow walkway above a fog-enshrouded pit, and several of the Amazons are implied to have been dispatched over the edge of the walkway).

Only the appearance of more Amazons, this time wielding laser spears and guns, is enough to finally subdue the weaponless Stella, and she is led away to meet the Amazon Queen, Queen Corelia.

After smugly revealing information relevant to Stella's quest, Corelia orders Stella to be put into a mind probe, whereupon Elie makes an unexpected re-appearance, temporarily taking the Queen hostage to force the Amazons to free Stella. They do so, but give chase afterward. But again they prove ineffectual, as Elie vaporizes three of their number with laser blasts.

The Amazon guards are uncredited but two of them have been idetified on imdb.com, including Dirce Funari and Cindy Leadbetter. 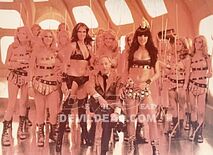