The Female Villains Wiki
Register
Don't have an account?
Sign In
Advertisement
in: 1970s, Amazon, Animal Weapon,
and 19 more

The Amazon Warriors are villainesses from the animated series Fangface. They appear in the 1978 episode Begone, You Amazon.

They are an army of warriors who serve the evil Thera, Queen of the Amazons. Thera took the role from her cousin, Sheba, who is the rightful ruler. She has stolen a medallion from her cousin which proves Sheba’s rightful claim to the throne, and has hidden it away. The Amazon Warriors all wear short brown skirts and gold bracelets, and carry spears and shields. Some of them have headwear, but most of them don’t. Most of them dress in boots, but a few go barefoot.

When her good cousin turns up with the show’s heroes, Thera has them sent to a gladiator arena where they will fight to the death for the pleasure of the evil queen and her army. One amazon warrior fights using a giant black cat, but she is defeated and the heroes escape from captivity. Thera commands that her army run after the heroes but they fail to capture them. During this period, the good guys manage to find the stolen medallion, and plan to show it to the amazon elders to prove Sheba should be the rightful queen.

During a meeting between Thera and the elders, Sheba and her new friends plan to break in and show the medallion, but they make a mess of the situation and one of them ends up being captured and assigned the role of being Queen Thera’s personal manservant, instead of being fed to the crocodiles. He submissively kisses her hand, which she really enjoys, and later ends up having to feed her grapes.

He is ultimately rescued from the situation by his friends, but Queen Thera and her amazon army chase after them. The villainesses chase the heroes down the river; riding on a crocodile and in canoes. They are defeated when Fangface uses the trunk of the tree to spin on the water, which causes a massive wave to knock the bad girls off their transport. The wave causes the amazon army to be trapped under their canoes on the shore, and Thera to be caught hanging in a tree. Later on, Sheba is shown on the throne as the new queen, but the fate of Thera and her army isn’t mentioned. 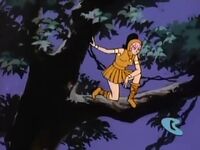 An evil amazon spies on the good guys from above... 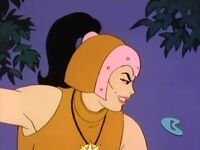 ...and gives an evil smile 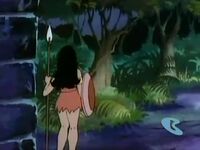 An amazon guards the entrance... 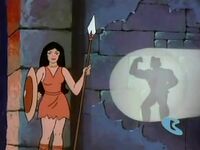 ...but is tricked by a shadow, allowing the good guys to sneak in 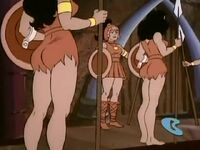 The evil amazon warriors stand guard in the throne room 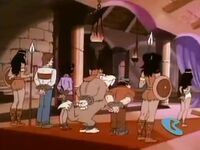 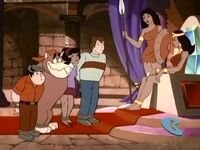 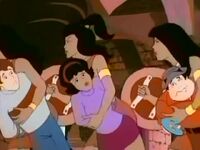 Taking the captured heroes away 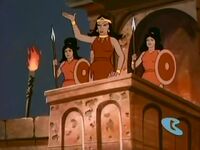 With the queen as she introduces the fight... 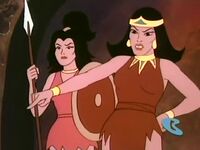 ...and gives the order for the entertainment to begin 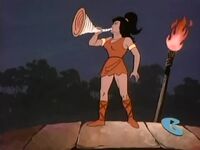 Sounding the start of the fight 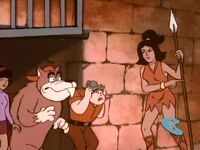 An amazon guard orders the heroes to fight... 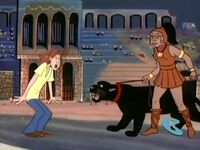 ...an amazon warrior and her large black cat 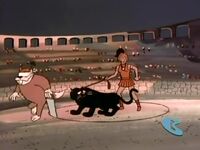 Fangface saws a hole around the evil amazon... 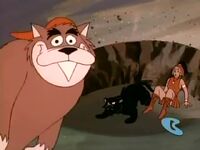 ...and sends her and her cat into a hole in the ground 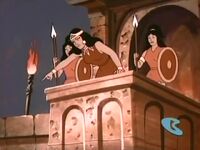 The heroes have escaped! Thera orders her army to get them 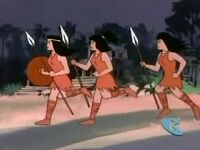 The amazons chase after the good guys... 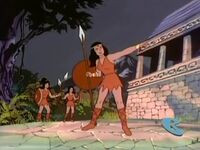 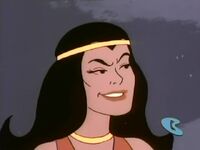 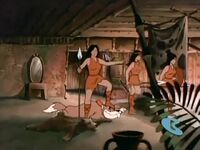 The amazons head inside and look around... 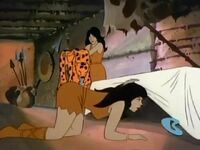 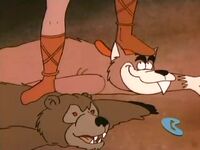 ...not realising they are right under her feet 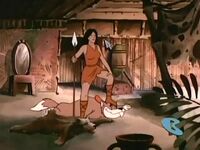 She stands on the head of Fangface, who pretends to be a rug 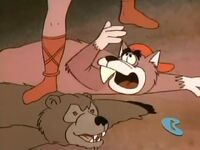 The evil amazon finally discovers him... 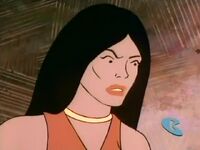 ...and looks at him with anger 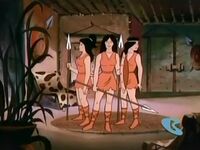 The heroes have escaped and the amazons don't know where 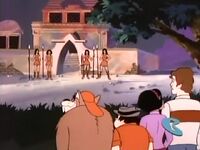 Trying to break into the guarded meeting with the elders 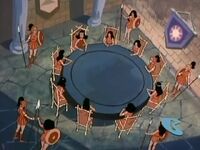 Thera and her army meeting the Amazon elders 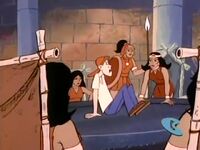 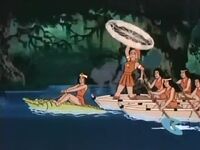 The villainesses chase after the heroes on water...

...but are defeated
Community content is available under CC-BY-SA unless otherwise noted.