"At first I actually believed that it was a pig that slept in front of me on the ground. An animal that somehow had eluded the banalities of my old life and managed to end up at this forsaken and forgotten place. But then it rose, from crouch to standing, with its lifeless eyes nailed to my person. I ran, as I have so brutally learnt to do. My curiosity halted my escape after a few feet and I hid in a cabinet. The Pig moved like a predator – and I saw: a human body wearing a pig’s head as ornament. It walked by the cabinet and its snout was just a few inches away from me. I held my breath, aching for freedom. A sudden sound caught the pig’s attention and it walked away. But not without giving me a last, final glance, as if it wanted to inform me that I was given a second chance. I will not get a third.”
—Unknown

The Pig or Amanda Young is a character from the horror video game Dead by Daylight.

She is apart of the Saw chapter.

When John Kramer, better known as Jigsaw, planned for his son to be born during the Chinese Zodiac’s Year of the Pig, he wanted it to represent fertility and rebirth; a new beginning for him and his wife, and the start of a charmed life for his son. But that plan was shattered on the night that a junkie broke into his wife’s clinic, hoping to score.

After this event resulted in the death of his unborn son, John finally caught up with the junkie, making him his first test subject, and the Pig was changed forever too. It became a representation of the disease that was rotting John from the inside, a reminder that we are just meat unless we elevate ourselves by our actions, by grasping life from the jaws of death. The Pig became a vessel, an agent of Jigsaw, conveying the subjects to their test. For some of those who emerged victorious, the Pig could still be a rebirth, into their new lives as apprentices, even disciples, of Jigsaw.

That was the case for Amanda Young, a troubled soul, whose life had been a catalogue of harm, both to herself and those around her. That changed when she faced, and bested, Jigsaw’s test. Deciding her life was worth something, she became devoted to Jigsaw’s cause, ready to take over when cancer consumed him.

But she became more dependant on John, her anguish at his impending death combining with a belief that their test subjects weren’t capable of saving themselves, of being reborn in the crucible of the games.

Seeing this, John presented her with another game, another chance to save herself, but Amanda let her rage and jealousy rule her actions. She failed the test and took a bullet as a consequence.

Bleeding out on the tiled floor, darkness engulfed Amanda’s vision, accompanied by a sound like creaking wood. Then she was in a forest, once more viewing the world through the eyes of a Pig. Trees surrounded her, their branches clawing at her from all sides. Waves of panic washed over her and she could hear her breath reverberating inside the mask.

Had she been damned, cursed to spend her days here, in this guise? Or maybe this was another test? Maybe she hadn’t failed at all? John always thought one step ahead of everyone else, planned for every eventuality, and he would never give up on her, surely?

Jigsaw may have gone but he had passed her onto another. A being for whom she would be The Pig again.

Ultimately, she saw now that she had been right in the choices she had made. The time for games was over. There was no chance of redemption for any of them. They were meat, and meat was destined to die. 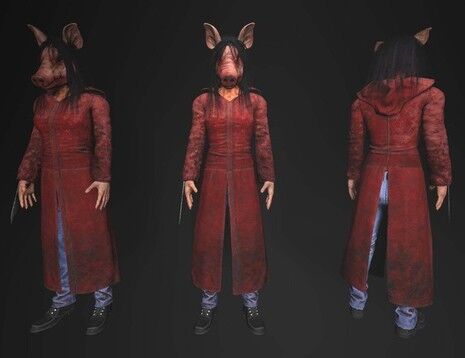 A razor-sharp blade, attached to a mechanical contraption that can conceal or extend it.

"You will give everything to me, every cell in your body. The marks on your arms, they're from another life. We'll leave that life behind. When you walk down that corridor there is no turning back. Do you understand that?" — Jigsaw's Baptism

Forever devoted to her master's cause, she punished the ungrateful and the guilty with slyness and murderous puzzles. The Pig can move stealthily, dash in ambush attacks and put deadly Reverse Bear Traps on Survivors' heads.

Use the Secondary Power interaction to assume a crouching position. While crouching:

The Pig has no Terror Radius. Activate the attack interaction to dash and perform an ambush attack. Start the trial with 4 Reverse Bear Traps:

Your ingenious modifications to Hooks prevent tampering and permanent damage. Hooks destroyed by sabotage or sacrifices repair after a short moment. Gain a notification when someone starts Sabotaging the Hooks.

Unlocks potential in one's Aura reading ability. The last regressing generators' Auras are revealed to you.

When a Survivor rescues another from a hook at least 24 meters away from the Killer, Make your Choice triggers and confronts the Survivor with a Skill Check. A failed Skill Check damages the rescuer.

There are currently 2 Achievements related to The Pig.

“No excuses, no equivocations... No crying.” - Amanda

“Are you gonna behave?” - Amanda

“You'd be surprised what tools can save a life.” - Amanda

“You will give everything to me, every cell in your body. The marks on your arms, they're from another life. We'll leave that life behind. When you walk down that corridor there is no turning back. Do you understand that?” - John

Retrieved from "https://femalevillains.fandom.com/wiki/Amanda_Young_(Dead_By_Daylight)?oldid=205966"
Community content is available under CC-BY-SA unless otherwise noted.