Start a Wiki
watch 01:51
The Loop (TV)
Do you like this video?
Amanda Warner (Mekia Cox) is the hidden main villainess from the second and final season of ABC's Secrets and Lies.

Amanda Warner is a criminal attorney and the second-born of three children of Yvonne and John Warner; the only daughter between brothers Eric and Patrick Warner. Her backstory reveals that she was married to Dr. Greg Young, and that she was desperately trying to become pregnant, as she was shown injecting fertility drugs in one episode. In the fourth episode of Cornell Confidential, it was revealed that Greg filed for divorce from Amanda at the party where Eric's wife, Kate, was murdered.

On the night in question, Amanda was with Kate on the roof of the company building, as Kate was worried about everything that was going on with her and Eric. Among the things that Kate revealed to her sister-in-law was that she was pregnant, which quickly got Amanda's attention, especially when Kate stated that her pregnancy "just happened." Amanda turned villainous in response by suddenly attacking Kate, while angrily venting over her own failed efforts to become pregnant. During the assault, the evil Amanda shoved Kate over the roof, killing her. Once Eric was suspected in Kate's murder, Amanda rushed to his defense, while hiding her villainous deed. She also anonymously sent clothing to police claiming that it belonged to Kate's killer.

Amanda was revealed as the villainess in the season finale, "The Truth," after Eric was arrested for the attempted murder of their mother, Yvonne. With Amanda at his side, Eric was asked to remember who he didn't see at the party area, and while he recalled not seeing Neal and Melanie, who had alibis, he also recalled not seeing Amanda, who did not have an alibi. Amanda claimed that she was mingling with the crowd, but the truth came out that Amanda was with Kate and later killed her. While Amanda's motive was jealousy over Kate's pregnancy, and she did state that doctors told her that she was going through menopause and could not get pregnant, Cornell informed Amanda that the doctors were wrong and after testing her blood, Amanda was indeed pregnant.

Amanda was arrested for killing Kate, though her sentence wasn't revealed. She asked Eric to take care of her child, which was revealed to be a girl in the finale's Cornell Confidential exclusive. 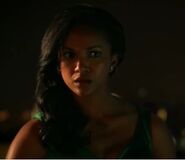 Amanda angrily glares at Kate during the flashback.

Amanda is revealed to have shoved Kate to her death.

Amanda Warner in prison
Add a photo to this gallery
Retrieved from "https://femalevillains.fandom.com/wiki/Amanda_Warner_(Secrets_and_Lies)?oldid=200874"
Community content is available under CC-BY-SA unless otherwise noted.