Start a Wiki
watch 14:21
The Loop (TV)
Do you like this video?
Amanda O'Reilly is a villain in the 2007 Fansadox webcomic "Confiscated Twins 4: Love Thy Neighbor".

Since her introduction, she is stated to have divorced a few times wealthy men, each time taking parts of their money. While not a full-fledged black widow, she is cunning and ready to use any means to get what she wants. Amanda married Mr. O'Reilly who illicitly charged Bauer of debt, confiscating her and her possessions.

Amanda becomes Bauer twins' mother owner along with her husband. While allowing the Bauers to grovel in shame she then seduces and frames Roy Murphy into being believed as a rapist against her, and takes the Bauer twins as a settlement for not pressing charges. Later, she gets evidence that her husband is cheating on her with her secretary, and thus divorces him, keeping yet another large sum of money. All of the while, she is seducing Ray's father and brutally torturing the Bauers.

When the Bauer twins escape, she does even worse things to their mother, including water torture. When she finds out that Ray was behind this, she arranges to leave the twins for him to rape, only cunningly replacing one of them and masking her, leaving Ray to unknowingly rape his own sister, Clara Murphy, for hours in a row.

She also films them during the deed to be sure she'll be left alone, and after she was shown on an island, with Ray's father, presumably breaking his marriage and their family in the process. Amanda later marries the Murphy's sibling father becoming their step-mother.

Later when an old flame of the Bauer twin's mother arrives, Amanda shows him the state of dehumanization is former lover is in prompting him to try and save her. Amanda continued to blackmail her step-children, though Roy has fully embraced incest and continued to have sex with Clara much to her delight.

Amanda meets a new neighbor, an elderly man named Mr.Green and his nurse Sasha. Clara then appears in aroused state due to the meds she is taking causing Amanda to rush her inside the house. She attempts to give Clara medicine to cancel out the effects, however Clara attacks her getting the two in a catfight. Amanda manages to overpower and later bond her in the attic, punishing her with a wipe to behave herself lest she attract the attentions of unsavory men and become a slave.

Later its revealed that Amanda is working for Mr.Green as he owns Sasha, her daughter and her actions are all for to free her. 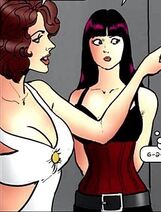 Add a photo to this gallery
Retrieved from "https://femalevillains.fandom.com/wiki/Amanda_O%27Reilly_(Confiscated_Twins)?oldid=194665"
Community content is available under CC-BY-SA unless otherwise noted.